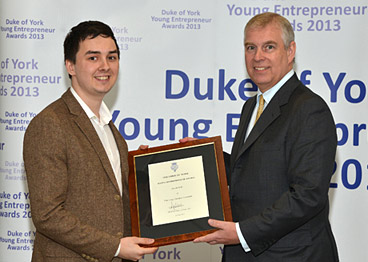 “Don’t take ‘no’ for an answer and recognise that you can do it,” was the message to the many young entrepreneurs that HRH The Duke of York, KG, met during his visit to the University’s new 3M Buckley Innovation Centre.

This message was also echoed in the words of encouragement His Royal Highness gave to the winners of the first ever The Duke of York Young Entrepreneur Awards.

Ten young entrepreneurs, one from each of the Yorkshire universities, gave a short presentation illustrating their business venture before The Duke of York presented them with their award.  The award to the Huddersfield student went to Enterprise Development degree student Jacob Hill (pictured left with HRH The Duke of York) for the success of his business, The Lazy Camper.  After the presentation ceremony, His Royal Highness also met with the winners and their family members to learn more about their business ideas. 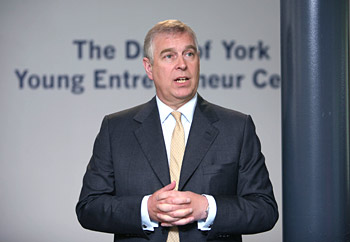 This is the fourth visit that The Duke of York has made to the University of Huddersfield.  His Royal Highness previously came in 2010 to launch the International Study Centre and meet the University’s international students.

‌His visit on this occasion focussed on innovation and enterprise and the work of University’s new £12 million 3M Buckley Innovation Centre, which The Duke of York opened: “There is a huge correlation between what the University of Huddersfield is achieving here and what is trying to be achieved nationally,” His Royal Highness told the audience of business people and young entrepreneurs.

The 3M Buckley Innovation Centre has been part-financed by the European Regional Development Fund and Kirklees Council. 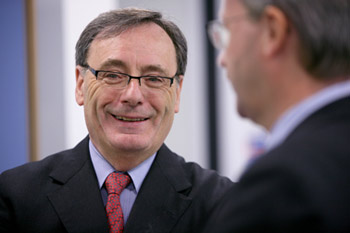 The research and enterprise facility has been named after businessman Sir George Buckley (pictured right), who is a graduate of the University of Huddersfield and former CEO of the multi-national 3M corporation.

Through Sir George, who attended on the day, the University has established a growing relationship with 3M.  The company sponsors the 3M Chair of Innovation at the University, which is currently held by 2013 Queen’s Award winner Professor Liz Towns-Andrews, the CEO of the 3M Buckley Innovation Centre, and the President of 3M New Ventures, Mr Stefan Gabriel, is a Visiting Professor of Innovation at Huddersfield.

‌“I am honoured and humbled that the University has chosen to commemorate me in the name of its splendid new Innovation Centre,” said Sir George, “and I’m very glad that I and the 3M corporation can put something back – by sponsoring the new professorial chair in innovation.  A lot of exciting things in the field of entrepreneurship are happening here.  The University of Huddersfield is definitely a place to watch!” 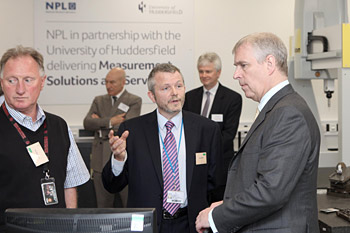 As well as viewing a number of research facilities that are already established in the Centre, including the laboratories occupied by the National Physical Laboratory (pictured right), His Royal Highness then welcomed 40 young entrepreneurs into the brand new The Duke of York Young Entrepreneur Centre, which has been created in the facility.

The Duke of York was introduced to the start-up businesses, run by both students and graduates, and opened the Centre.  The mood and excitement of the occasion was summed up by Sir George who said that “there is no doubt that a figure such as His Royal Highness plays a significant role as a catalyst for the enterprise and innovation that the UK needs to compete in the global business environment”.

‌The Duke of York concluded his visit by visiting three of the University’s leading research centres the EPSRC Centre for Innovative Manufacturing in Advanced Metrology, the Institute of Railway Research and the International Institute for Accelerator Applications. 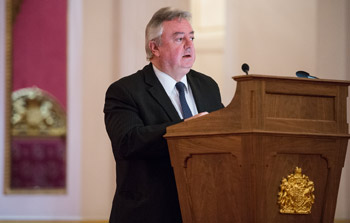 The University’s Vice-Chancellor, Professor Bob Cryan (pictured left speaking at Buckingham Palace), said: “I am passionate about the role that education and entrepreneurship can play in economic regeneration, and I know that His Royal Highness feels the same way.  It is a central part of The Duke of York’s role and I was really pleased to visit Buckingham Palace in February this year, where His Royal Highness hosted the launch of the Student Ambassador Programme for the Government’s Start-Up Loans scheme.  I was thrilled to welcome The Duke of York back to the University of Huddersfield, where we have placed entrepreneurship, innovation and business engagement at the heart of what we do.

“We have been deeply honoured to receive two Queen’s Awards this year and it was also a great honour to play host to a member of the Royal Family, who is so well-respected for his work on behalf of British business.”

Click here to view the other Royal visits to the University.