CREATIVITY was the keynote when the Prince of Wales visited University Campus Barnsley.  He was greeted by a song specially composed for the occasion; he learned about new business enterprises that were rooted in the arts and crafts plus the latest digital technology; and he took a keen interest in the work of a roster of talented students and recent graduates who are making their mark in the art world.

“I have been thrilled to see some of the things your students have been able to achieve,” said the Prince, who also praised the Barnsley teaching staff for their role in enabling students to fulfil their full potential.

The Royal visit to the University Campus was the centrepiece of the Prince’s first visit to Barnsley.  He came to the campus in order to unveil a plaque marking the 80th anniversary of the opening of the building, which began life as the Barnsley Mining and Technical College.

The Prince was welcomed to the campus by Professor Bob Cryan, who is Vice-Chancellor of the University of Huddersfield.  As he entered the building, a band of students (pictured) performed an all-new song, “I Can’t Wait For The Future”.  An upbeat take on student life and the possibilities opened up by university study, it was penned by Ian Hopper, who is completing the final year of his Popular Music degree and will then move on to acquire teaching qualifications. 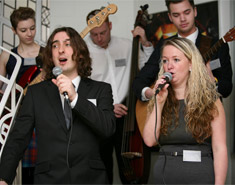 The Head of the Campus, Pete Birkby, escorted the Prince as he learned about the enterprising activities of undergraduates and recent graduates.  Senior lecturer Lynn Rollin described the Graduart Project, which aims to help students market their creations more effectively.  The scheme has had financial backing from the University’s Teaching and Learning Fund.

The Prince met graduate Kirsty Lazenby (pictured), whose business named Vintage Sweetheart recreates vintage clothing using original patterns and fabrics.  Kirsty wore one of her own 1950s-style dresses and the Prince praised her use of recycled materials in order to make authentic retro garments. 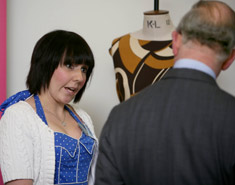 When he met Donna and Carl Lamb, whose business Urban Music Production is based in studios at South Elmsall, the Prince learned that the couple met and married while studying popular music and sound production at the campus.  Now they run a record label, work with local bands and take part in accredited education projects – Donna is now studying for her Postgraduate Certificate in Education.

Members of Atmos Productions with the Prince 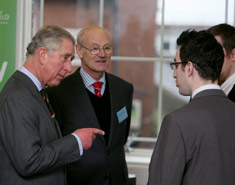 Atmos Productions is a new venture which produces innovative son-et-lumiere style presentations, featuring music, visual effects, lighting displays and narration –  all controlled by digital technology.  It has recently enjoyed success with a run of “The Snow Goose” at a church near Huddersfield, featuring narration from top actor Sir Patrick Stewart, who – as the Prince of Wales was intrigued to learn – is Chancellor of the University of Huddersfield.  Key members of Atmos Productions are UCB students and graduates in music technology. Two of them – Michael Gaughan and Steve Anders, joined by businessman Richard Wood – explained their work to the Prince.

He then encountered Elliott Johnson and Lewis Banks, two Barnsley graduates who are highly skilled in video technology and animation.  They, together with graduate Sam Wilson, formed a company called Rendaa and in order to showcase their talents, they created a cutting-edge TV commercial for the betting shop chain William Hill.  The company was so impressed that it now gives the Rendaa team a monthly brief to provide topical video footage screened in its chain of betting shops. 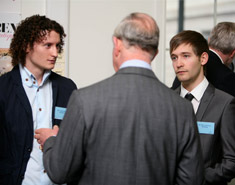 Elliott Johnson and Lewis Banks of Rendaa with the Prince

The Prince of Wales is an accomplished artist himself and when Emma Hunt, who is Dean of the Campus, introduced him to three of the most accomplished and promising artists to have emerged from the campus, he took a close interest in the techniques they employed.

Tom Martin, aged 25, who lives in Rotherham, graduated in art and design in 2008 and is rapidly earning a big reputation for his painstakingly painted and uncannily realistic works.  He belongs to a school known as Hyper Realist art and his work has already been featured in a major book and displayed in London galleries.  Two of his works were on show when the Prince came to UCB.

Barnsley artist Lee Gascoyne graduated from UCB in 2011 and exceptionally high marks earned him a Chancellor’s Prize.  One of his large, thought-provoking works – entitled “Observation Without Manipulation” – was on display for the Royal visit, and Lee talked to the Prince about the challenges of beginning a career as an artist.

Lee is a former winner of the title South Yorkshire Emerging Artist of the Year.  And the current holder of this is Julie Newton, now entering the final year of her degree in inter-disciplinary art at UCB. 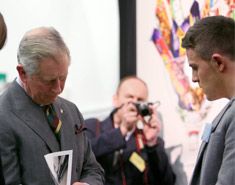 Artist Tom Martin and the Prince

Julie specialises in pictures with a narrative, autobiographical element and for the Royal visit she displayed an atmospheric tryptitch of pictures depicting different stages of life and her relationship with her young daughter.  The Prince was intrigued by the symbolism and the objects depicted in the pictures.

After a varied career, London-born Todd Ibrahim decided to develop his skills in film-making and video production and came to Barnsley, graduating with a first-class degree last year.  He has now set up in business as a digital film and video consultant, and the Prince of Wales was shown a lively extract from his promotional film designed to showcase a sequence of young Barnsley athletes who are Olympic hopefuls.

As the Royal tour neared its conclusion, Professor Cryan thanked the Prince and spoke about the contribution made by the University Campus Barnsley to the economic and social regeneration of the region. 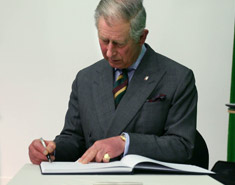 “Music and art have been cornerstones of your life, “he said to the Royal visitor, “and this campus is an exceptionally lively centre for the study of these subjects.  We were able to greet you, therefore, with a performance of a special composition and to introduce you to some of the exceptionally talented visual artists who have been trained here and are making their mark on the wider art world“.  Professor Cryan also informed the Prince about the many ways in which the University of Huddersfield would be commemorating the Queen's Diamond Jubilee during 2012.

The Prince of Wales was presented with a book entitled “Changing Barnsley”, edited by two members of the University staff, Cathy Doggett – a former Head of the Campus – and Professor Tim Thornton, who is Pro Vice-Chancellor for Teaching and Learning.  The Prince then spoke about the people he met and the themes that emerged during his visit and unveiled the plaque commemorating the 80th anniversary of the Campus’s building.

During the visit, the Campus also provided facilities for the Prince of Wales to have an extended discussion session with young people and volunteers who have an active involvement with his Prince’s Trust and he also met a group of teachers taking part in the scheme TeachFirst, which aims to encourage top graduates to use their skills to address problems of educational disadvantage.

While visiting Barnsley, the Prince also visited the premises of its local newspaper, and he also saw a nearby statue of a Barnsley legend – test match umpire Harold “Dickie” Bird OBE.  Dickie was also there in person – and among the other dignitaries who assembled for the Prince’s visit was the Lord Lieutenant of South Yorkshire, the High Sheriff of South Yorkshire, the Mayor of Barnsley and the town’s MP. 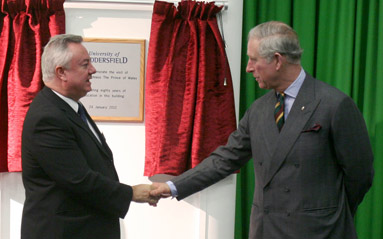 The Prince (right) and the University's Vice-Chancellor, Professor Bob Cryan, at the unveiling of the plaque. 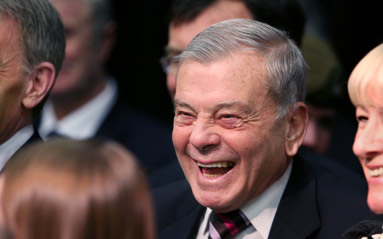