Lemn Sissay welcomed again to the University of Huddersfield 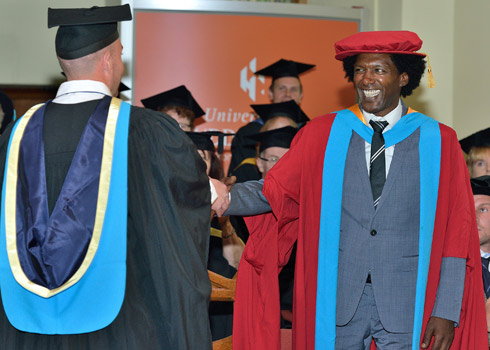 One of the UK’s leading poets and playwrights made his second visit to the University of Huddersfield within a month. 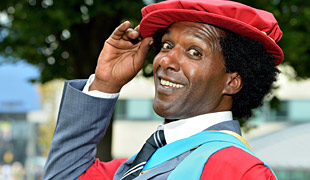 The poet joined the academic processions and shared the stage with the School’s lecturing staff before stepping forward to congratulate each of the graduates attending the ceremonies in his very own inimitable style.

Lemn Sissay was himself presented with an Honorary Doctorate by the University in 2009, which is one of many accolades that he has received.  In 2010, he was awarded the MBE for services to literature, he is the associate artist at the Southbank Centre and he was the first of five poets commissioned for last year’s London Olympics.

As well as writing plays for stage and BBC radio, he is a regular columnist for The Guardian newspaper and he is also the author of five collections of poetry.

One of his famous works was his sculpture poem, Gilt of Cain, which was unveiled by Bishop Desmond Tutu and can be found in Fen Court in London.  The sculpture poem commemorates the abolition of the transatlantic slave trade in 1807.

On a recent visit to the University the renowned writer gave his permission for his Landmark Poem Let There Be Peace to be installed on the wall of the University’s new £22 million Learning and Leisure Centre.

The poet has been a regular visitor to the University of Huddersfield and has given two public lectures on campus and been involved with a number of poetry workshops to raise the aspirations of looked-after young people.

Lemn Sissay, who spent his teenage years from the age of 11 to 17 in residential care, has become an ambassador for the rights of young people in the care system.  His Ethiopian birth mother, who had come to Britain as a student, was pressured into giving him up for fostering.  After an early upbringing in foster care, he was handed back to social services at the age of 11.  These early experiences set in his mind the need to improve the life chances of other youngsters who have become looked-after children and young people.

Children coming through the care system are faced with a great many obstacles and of the thousands of looked after young people in the UK few go into higher education and even fewer progress to PhD level study.

In 2010, the University of Huddersfield created a PhD scholarship which was designed to provide an opportunity for a care leaver to progress beyond undergraduate study based on the recognition that while they might enter the university system, getting further was more difficult. 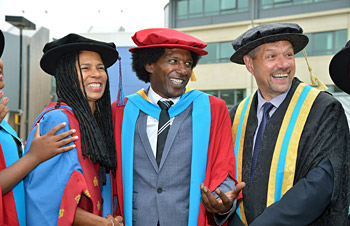 The scholarship was named The Lemn Sissay PhD Scholarship with the kind permission of the poet and it is the only scholarship in the country designed specifically to offer a care leaver the opportunity to be supported by a university whilst they undertake a PhD.

Belinda Bluff, who herself was a looked after young person, is one of the few that did go to university and Belinda was awarded The Lemn Sissay PhD Scholarship.  She is currently working towards the completion of her doctorate, which is exploring care leavers’ experiences of transition to higher education.