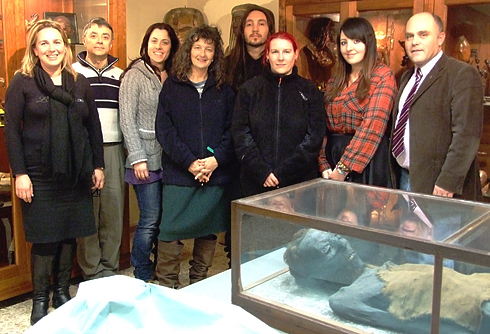 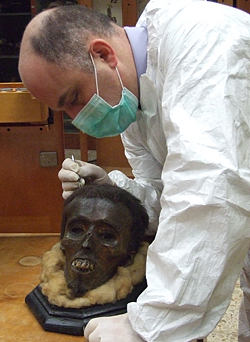 THE mummified bodies of Peruvians who died up to 1,000 years ago will yield up their secrets, thanks to a prestigious research project by the University of Huddersfield’s Dr Stefano Vanin (pictured right) and two of his students in collaboration with the University of Pisa and the Ancient World Society.

For PhD student Esta Bostock, from Brighouse, and forensic science undergraduate Pip Elrington, from Bolton, it has meant a trip to the famous Italian town of Pisa, where they have peeled away the layers of fabric surrounding ancient corpses that have long been part of the collection of the Museum of Anatomy at the University of Pisa.  By analysing the insects that colonise dead bodies – from recent murder victims to ancient mummies – Dr Vanin can draw a wide range of conclusions about how, why and when the person died and the nature of their society and their traditions.

He has been called on to research several mummified bodies and his latest project is perhaps the most challenging yet, he says.  In order to carry out this research and to improve the exchanges between  the Universities of Huddersfield and  Pisa, Italian-born Dr Vanin has signed an agreement between the Department of Chemical and Biological Sciences at the University of Huddersfield and the Museum of Anatomy in Pisa, which has long been home to five fardos from pre-Columbian Peru and several other skeletons and artefacts - view the story on the University of Pisa website.

They were brought to Europe – as long ago as the 18th century – by a wealthy collector.  Between 600-1,000 years-old, they probably belonged to an ancient civilisation named the Moche that flourished in Peru in the first millennium AD.

‌In a fardo, the mummified body is laid in a foetal position and wrapped in layers of fabric that contain objects from the person’s life – such as shoes and metallic objects – and also fragments of food.  Dr Vanin and the two students have been collecting insect parasites present on the body before the death and carrion feeding insects that colonised the mummies. 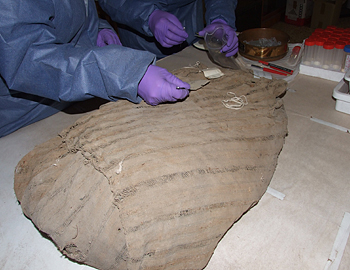 It is also planned to sample some teeth from the fardos in order to extract pathogen DNA.  Using techniques such as electron microscopy and DNA analysis at the University of Huddersfield, a large amount of information will be learned about the pathogens that affected the mummified bodies before death.  Then a picture of the health of the ancient civilisation and its life expectancy will begin to emerge. 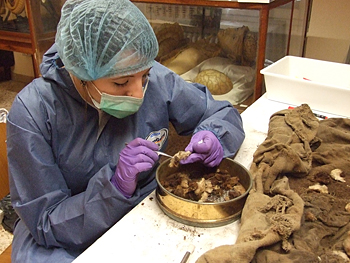 Students Esta and Pip accompanied Dr Vanin on a trip to the Pisa museum, and remained for almost a week while they opened fardos – including a previously unexamined one that contained the skeleton of a small child.  They retrieved residue, including a huge number and variety of insects.  This activity, performed by Esta and Pip, has been recorded and it will be part of a documentary about the Moche funerary practices.

“It was a huge responsibility, but I decided to send them because they had all the skills that were needed,” said Dr Vanin.

The next task will be to compile a list of the insects from the Peruvian mummies. 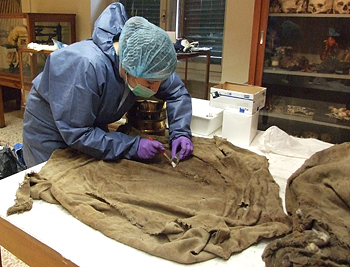 “This will not be easy because they are ancient insects, which belong to South American fauna, so we might need some specialist help,” said Dr Vanin.

But once the insects are carefully catalogued, the process of DNA extraction and analysis can begin and new knowledge gained about a pre-Columbian civilisation in what became Latin America.

Dr Vanin has recently been engaged in several other Italy-based research projects into mummified bodies and has a key role in the investigation of bodies found in church crypts in the towns of Monsampolo del Tronto and Roccapelago.

It was the Roccapelago research that drew the attention of an anthropologist in Pisa to Dr Vanin’s expertise in forensic entomology and he was recruited for the project to investigate the fardos at the Museum of Anatomy.