Nuclear alternative to power the future

Since this story was published Professor Cywinski was also invited by the Weinberg Foundation to join a delegation to attend the International Thorium Energy Organisation's conference in China as a guest speaker.  Professor Cywinski's talk, ‘Particle Accelerators and Thorium Energy’, outlined the physics of accelerator driven neutron spallation, and the suitability of existing and emerging accelerator technologies in thorium energy applications.

A LECTURE by the University of Huddersfield’s Professor Bob Cywinski inspired a senior figure at the world’s leading science museum to stage an exhibition on safer alternatives to uranium as a source of nuclear power.  And it has sparked public debate.

At the Science Museum in London, the gallery named Antenna focuses on contemporary issues in science and technology.  Until January 2013 it features an exhibition named Can we get electricity from nuclear waste?.

It is based on the case made by Professor Cywinski and his colleagues in favour of thorium as an alternative to uranium and the use of particle accelerators in tandem with nuclear reactors (see more about this in the video). The result would be safer reactors that produce less waste – and existing nuclear waste could be recycled to generate electricity.

The University of Huddersfield is home to the International Institute for Accelerator Applications, where senior research staff include Professor Cywinski – who is Dean of Applied Sciences – and Professor Roger Barlow, who headed a project at the Science and Technology Facilities Council’s Daresbury Laboratory that created a compact and reliable particle accelerator named EMMA.

This technology would be central to the generation of electricity by thorium-fuelled reactors.  A centrepiece of the exhibition at the Science Museum is one of the quadruple magnets from EMMA.

The surrounding text content at the Antenna gallery – plus the exhibition’s website at http://antenna.sciencemuseum.org.uk/?page_id=18430 – includes material from Professor Cywinski in which he explains the case for particle acceleration:

“It removes the need for a chain reaction, making the reactor safer.  We don’t have to use uranium.  Protons from the accelerator bombard a heavy metal target within the reactor.  This knocks neutrons off the heavy metal.  These neutrons convert the element thorium into a nuclear fuel and then split its atoms, releasing energy.

“Conventional uranium-fuelled reactors produce highly radioactive waste which can last for thousands of years.  Thorium produces far less of this waste.  Even better, our reactors could use radioactive waste from conventional reactors as fuel.  That means they could supply us with electricity by recycling existing dangerous waste.” 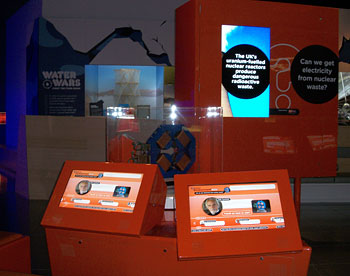 Dr Corinne Burns, who is Assistant Content Developer for Contemporary Science at the Science Museum, explained the genesis of the new Antenna exhibition (pictured right).

“I attended a public lecture given by Bob Cywinski about the potential of thorium as a nuclear fuel of the future.  He described energy amplifier technology.  I thought it was a fantastic idea, and that more people should get to hear about it,” she said.

The exhibition has quickly generated interest and debate, according to Dr Burns.

“Our Antenna gallery is a great place to introduce a range of people to new ideas and new technology and to allow them to make an informed option about scientific research.

‌ “The visitor comments that we’ve had have been measured and thoughtful and show that the UK public is open to the idea of novel nuclear technology as a potential power source.  Our poll shows that most people still think that renewables are the best option for future energy, but the comments on the exhibit demonstrate a cautious optimism about the prospects for energy amplifiers in the UK’s future,” said Dr Burns.

Leading figures from science have responded to the issues raised in the Antenna exhibition.  Highly supportive is Professor Jim Al-Khalili, the nuclear physicist and broadcaster (pictured with Professor Bob Cywinski and featuring in the video below): “I’m convinced that thorium reactors would address many of our current concerns about dangerous waste and safety.  It will require investment, but the merits of thorium energy need to be considered in relation to subsidies given to renewable energy or the long-term prospects for nuclear fusion research.  This energy offers real benefits and a real future.”

See more on Jim Al-Khalili's views on thorium as a nuclear energy in this video: