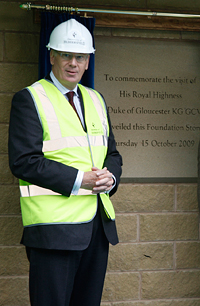 The University of Huddersfield was pleased to welcome His Royal Highness the Duke of Gloucester KG GCVO to its campus to unveil the Foundation Stone for the brand new building for the Business School.

His Royal Highness was greeted by the University’s Chancellor, world famous stage and screen actor Patrick Stewart, and introduced to the Vice Chancellor Professor Bob Cryan and his colleagues, as well as Kirklees civic dignitaries, the Duke was taken on a tour of the campus.

Before the ceremony, His Royal Highness was given an insight into the range of study and research at the university. He was shown the podiatry clinic and then witnessed drama students at work, which tied in with another of the Duke’s many interests - he is Patron of the British Mexican Society and he watched as students performed a piece partly derived from ancient Mexican ritual dance..

The Duke’s own academic background reflects his deep interest in architecture – he achieved both a BA and Diploma in Architecture before going into practice as a partner of a London firm. Following in the footsteps of his cousin, Queen Elizabeth II, who unveiled the Foundation Stone for the University’s Creative Arts Building last year, the Duke took pleasure in officially laying the Foundation Stone for the £16m development, which lies between Firth Street and the Huddersfield Narrow Canal, and is set to be ready for students in September 2010. It marks the next phase of the University’s ambitious £150 million new build programme, which has seen £80 million invested over the past ten years and plans for a further £70 million over the next seven. 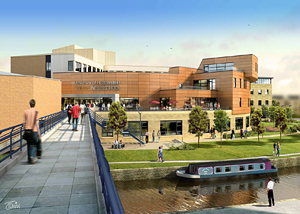 ‌Vice-Chancellor, Professor Bob Cryan, is pleased with the progress of the building: “Business at the University of Huddersfield is increasingly popular, and we would like to give our 3,800 Business students a brand new home. We do world-class work here, so we deserve to have a world-class building.”

‌The new building reflects the growing demand for business courses at the University, and is due to offer students state-of-the-art facilities – including a mock court room for Law students on the top floor, where they will have spectacular views of the canal from the roof level terrace.

The new Business School will surpass even the recently-opened Creative Arts Building to become the most environmentally friendly building on campus. The new Business building is on target to achieve a BREEAM ‘Very Good’ rating, a world recognised standard for best practice in sustainable design.

Central to the project are energy and carbon saving considerations.  The whole building has been designed to be energy efficient, incorporating state of the art energy saving technology. Ecological considerations have also been taken into account - prior to commencing on site, an ecologist was engaged to carry out a full site survey and biodiversity review.

This has led to the production of a Nature Conservation Site Management Plan covering the ecologically significant areas in close proximity to the new building, including the narrow canal and the wooded areas.  Ecological enhancement of the site will be met through the planting of native shrubs and seedlings, use of peat free composts, the introduction of bat roosts and bird boxes, and provision of a bat-sensitive lighting scheme.