The strange case of Arthur Conan Doyle and the Cottingley Fairies

Why was the Sherlock Holmes author so away with the fairies?  Huddersfield lecturer Dr Merrick Burrow explains… 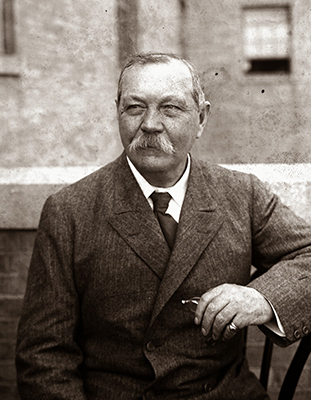 IN the summer of 1917 two young girls in Cottingley, near Bradford, stole out with a borrowed camera and the pictures that resulted would become some of the most widely reproduced images of all time.  For the cousins – 10-year old Frances Griffiths and 16-year old Elsie Wright – purported to have photographed fairies gambolling in the beck at the back of their garden.

The pictures were mocked-up fakes – as the two women would admit much later in life – but they fooled some highly intelligent and sophisticated personages of the period, including the author Sir Arthur Conan Doyle (pictured right), creator of Sherlock Holmes.

Now, during 2017’s centenary of the famous Cottingley fairies hoax, a University of Huddersfield lecturer, currently completing a book on the multi-faceted Doyle, is playing a prominent part in commemorations of the episode. 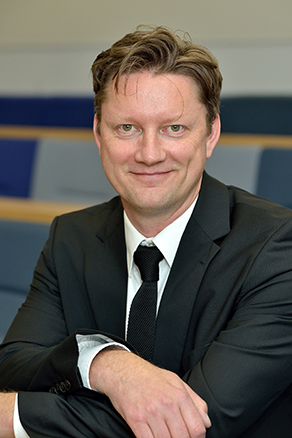 Head of English Dr Merrick Burrow (pictured left) will give lectures and take part in public events within Yorkshire, but his advice is being sought as far afield as Japan, where a dedicated fairy museum is mounting a special exhibition.

On Tuesday 9 May (2pm) he gives a talk titled Sherlock Holmes and the Cottingley Fairies at the Kirkstall Abbey Museum in Leeds.

Dr Burrow had involvement in planning the Fairy Folklore exhibition at Keighley’s Cliffe Castle Museum that runs from 8 May – 8 October.  And he has been in talks with Japan’s Chiba University and appointed an official advisor to the Utsunomiya Fairy Museum, which has acquired material that belonged to Edward Gardner, an advocate for the authenticity of the Cottingley photos.

There are many layers to the Cottingley fairies story, and that is why it is so intriguing, said Dr Burrow. 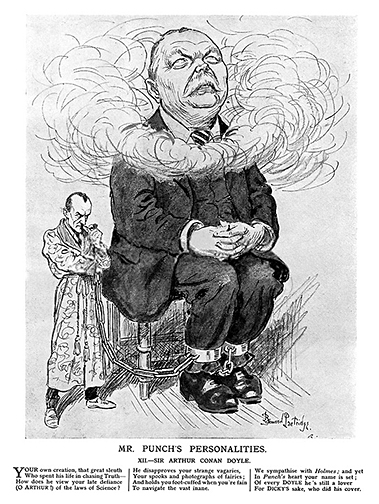 ►Punch magazine cartoon depicting Sir Arthur Conan Doyle with his head in the clouds chained to his creation, Sherlock Holmes

‌“The fascination isn’t just that Conan Doyle was taken in, but that these two village kids managed to construct this beautiful set of photographs.  A lot of the attempts to replicate them with paper cut-outs and hat pins couldn’t produce something quite that beautiful.”

‌One explanation is that the best-known of the pictures, showing Frances with the fairies - one of the most reproduced photos of all time – was not one that her cousin Elsie actually took.

The pictures became famous after coming to the attention of Edward Gardner, an ardent believer in fairies and a theosophy lecturer.  In order to have a high-quality image that he could project during his lectures, he arranged for a leading photographic expert to touch up and enhance the picture of Frances.

But why was Sir Arthur Conan Doyle deceived?  After Gardner alerted him to the photographs in 1920, the famous author penned a Strand Magazine article and a book that vouched for what he called The Coming of the Fairies.

“The standard narrative is that Doyle was traumatised after losing various family members in the Great War and turned to spiritualism as a kind of solace.  He became dogmatic about it and a propagandist for spiritualism around the world,” said Dr Burrow. 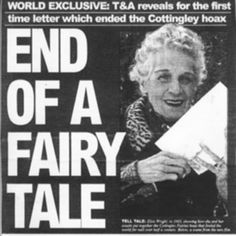 “It is usually said that he wanted to believe the truth of the Cottingley photos, but I think that’s not entirely right.  Conan Doyle was being strategic.  Unlike Gardner, he was not particularly interested in fairies but in something that would provide empirical proof of the preternatural.

“For him, the Cottingley photos served a useful purpose, not least because he was involved in a separate controversy around the time involving spirit photography.  He did care about that a great deal because it was part of the framework of spiritualism.”

Today, the Cottingley fairies saga is cited as “a grand example of a supposedly lucid, rational, educated and scientifically-trained man being taken in”, said Dr Burrow, whose forthcoming book has the working title Sir Arthur Conan Doyle and the Exact Science of Deception.

One of his literary arguments is that Conan Doyle’s writing was at its best when the author still had an open mind on scientific and supernatural issues.

“But once he had made his mind up about spiritualism after 1917, his literary powers declined.”