TWO University of Huddersfield professors have launched the first edition of a UN guidebook that will aid governments, regional authorities and communities around the world to prevent and recover from natural and man-made disasters, ranging from floods to terrorist atrocities.

The launch took place in Cancun, Mexico, at the United Nations Global Platform for Disaster Risk Reduction.  Attended by more than 6,500 delegates, including Heads of State, leading politicians, the event – organised by UNISDR (the United Nations Office for Disaster Risk Reduction) – is the world’s foremost gathering of stakeholders committed to reducing disaster risk and to building the resilience of communities and nations.

As co-directors of the Global Disaster Resilience Centre, based in the University of Huddersfield’s School of Art, Design and Architecture, Professors Dilanthi Amaratunga and Richard Haigh were heavily involved in the 2017 Global Platform, leading or taking part in a succession of sessions.

One of these had an attendance of more than 1,300 delegates and saw the launch of the first official draft of the Sendai Framework Words into Action Implementation Guide on disaster risk reduction governance and accountability.  This 60-page publication has been edited by Professors Amaratunga and Haigh, who chaired an 80-strong global working group, with members from 47 countries. 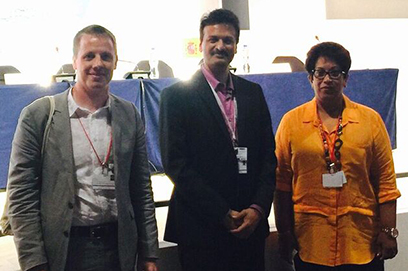 Delegates at the Global Platform in Mexico were invited to provide feedback on the document, and now a finalised version of the guidebook is due to be published in July.  Copies will be supplied to all 187 countries that were signatories to the Sendai Framework for Disaster Risk Reduction.  One of the aims of this Framework is to issue a series of Words into Action implementation guides, including the volume edited by the Huddersfield professors, which is one of the first to be completed.  It has met with a highly positive response.

“It is designed to be evidence-based and grounded in state-of-the-art scientific studies,” said Professor Haigh.  “It is multi-disciplinary in scope, so includes a wide range of perspectives, including political science, law, climate science and built environment.”

In addition to the launch event at the Cancun conference, the Huddersfield professors were the co-organisers and focal points for a main session on Disaster Risk Governance, at which Professor Amaratunga was a panellist.  Other Panellists included the National Director for Disaster Risk Management, Colombia, the Minister of Government for Panama, the Managing Director of the Disaster Risk Management Center (DRMC), Lebanon, and Executive Secretary General of the Asia Pacific Broadcasting Union (ABU). 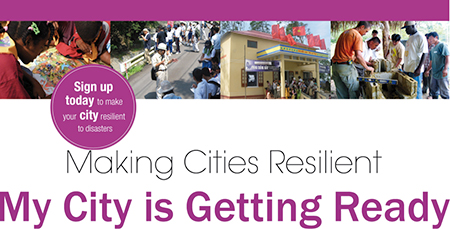 Professors Amaratunga and Haigh were also co-organisers of a session on disaster risk governance at the local level.  The session aimed at understanding how local governments can be empowered, and governance can be reformed to ensure successful implementation of DRR initiatives at the local level.

In their capacity as formally appointed UN Advocates for the campaign, the Huddersfield professors also participated in the UNISDR’s Making Cities Resilient advocates meeting.

The professors are the only two Advocates in the UK and among a group of 40 worldwide.

Finally, the professors attended the Mexican Government’s Multi-Hazard Early Warning Conference, which aims to demonstrate how countries and communities can improve their access to multi-hazard early warning, risk information and assessment.  They had bi-lateral meetings with Sirinivasa Kumar Tummala, Head of the Intergovernmental Co-ordination Group for the Indian Ocean Tsunami Warning and Mitigation System Secretariat (ICG/IOTWMS), about continuing their collaborations as part of the EU funded Erasmus+ project CABARET, which aims to build capacity for regional multi-hazard early warning.