Heart to heart with the Duchess

Duchess of York judges student creations that will alert women to coronary problems, in conjunction with the British Heart Foundation 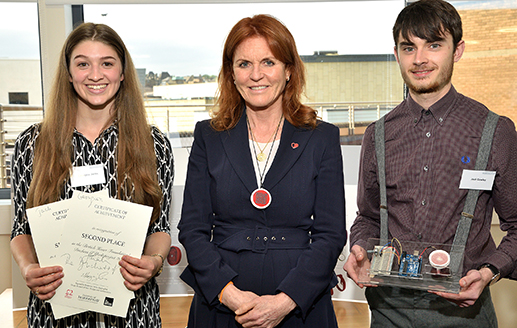 INSPIRED by a design challenge from the Duchess of York, teams of talented University of Huddersfield students have developed a range of technologically-advanced wearable devices that can monitor the heart health of women and help to stave off the risk of coronary failure.

Using the latest in sensor technology, plus the potential of wireless communication, smartphone apps, modern textiles and 3D printing, the students came with ideas that include a bra that keeps track of its wearer’s heart health; a stylish bracelet that can monitor heart health; and a necklace for pregnant women, fitted with sensors that issue warning signs and can even transmit them to a GP.

The Duchess then came to the University to head a panel of judges that inspected the five designs and it chose a winner – leggings embedded with sensors that can record blood pressure and heart rate, sending data wirelessly to a smartphone.

Half of the seven million people living with heart and circulatory disease in the UK are women.  When the Duchess became an ambassador for the British Heart Foundation (BHF) she was made aware of “terrifying” statistics, such as the fact that 77 women die every day from coronary illness, which is a bigger killer than breast cancer.

“I started a campaign with the BHF to alert women that when they get that pain in a supermarket it’s not just from carrying the supermarket bags.  They must go and get it checked!” said the Duchess, who realised that the subject would be ideal as the basis for the latest in a series of design challenges at the University of Huddersfield, where she holds a Visiting Professorship. 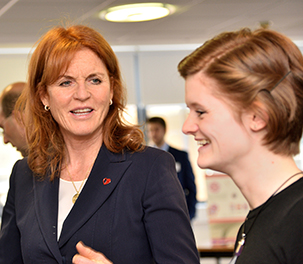 Ten students in the University’s School of Art, Design and Architecture were selected and formed into teams of two, each consisting of one textile practice student and one product design student.  Most were in the second year of their degrees.  They spent weeks researching coronary illness in women and then they developed a range of product ideas.  After feedback from tutors and fellow students they focussed on one product, creating prototypes and explanatory material.

Supervising the project were senior fashion and textiles lecturer Nicola Redmore and Dr Ertu Unver, who is Principal Enterprise Fellow in 3D and Product Design.

The Duchess came to judge the results, heading a panel from the BHF, including coronary specialist Professor Sven Plein.

As winners, they chose Andrew Mullin and Hannah Russell, whose device is named Compressure.  It consists of special leggings, including a waistband battery powering a monitor that records blood pressure and heart rate, sending the data to a smartphone.

In second place came Pulse, from Jack Cowley and Georgina Jenks.  It is a wearable accessory equipped with a computer chip that makes it pulsate every eight minutes, representing the fact that in the UK this is how often a person dies from a heart attack.  The device is intended as a talking point, spreading awareness in particular of Spontaneous Coronary Artery Dissection.  It also has a QR code linked to the BHF website. 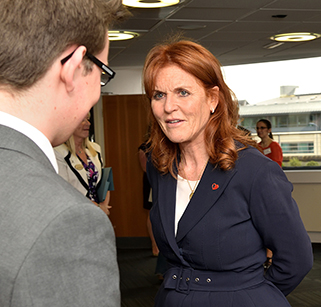 There was praise too for the other entrants:

The Duchess said she was proud of her connection with the University of Huddersfield and was impressed by all the devices that she saw.

“Whenever I come here there are such high standards and technical ability.  Every single device I have seen today could change a woman’s life – in fact give a woman her life.”

The Duchess’s trip also included a visit to Huddersfield’s Kirkwood Hospice, marking its 30th anniversary, and she revealed that this had furnished inspiration for her next University of Huddersfield design challenge, later in the year.  This would involve the design of elements such as wallpapers and textiles to change the atmosphere and improve people’s lives.

Students with their designs 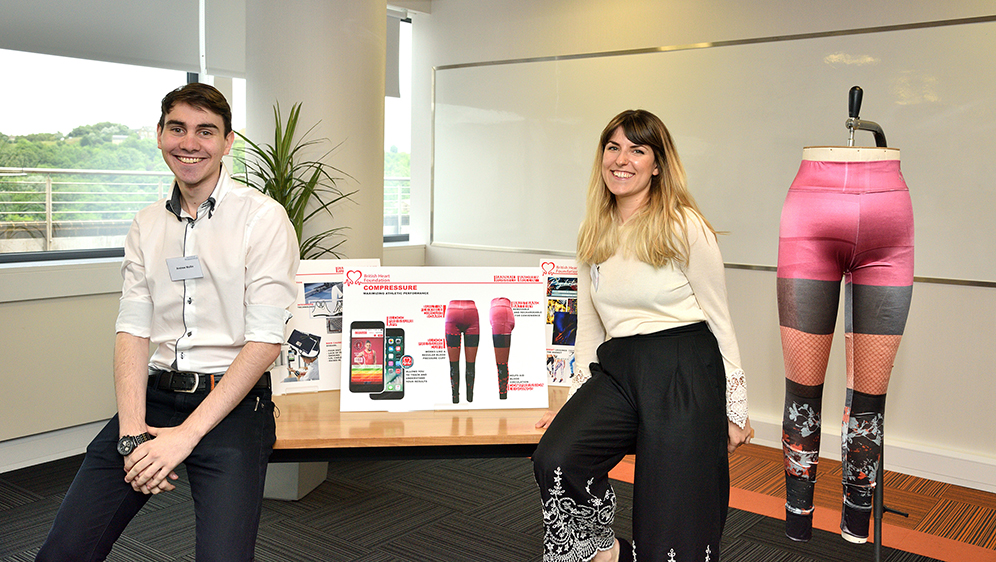 Above - Andrew Mullin and Hannah Russell with their device named Compressure 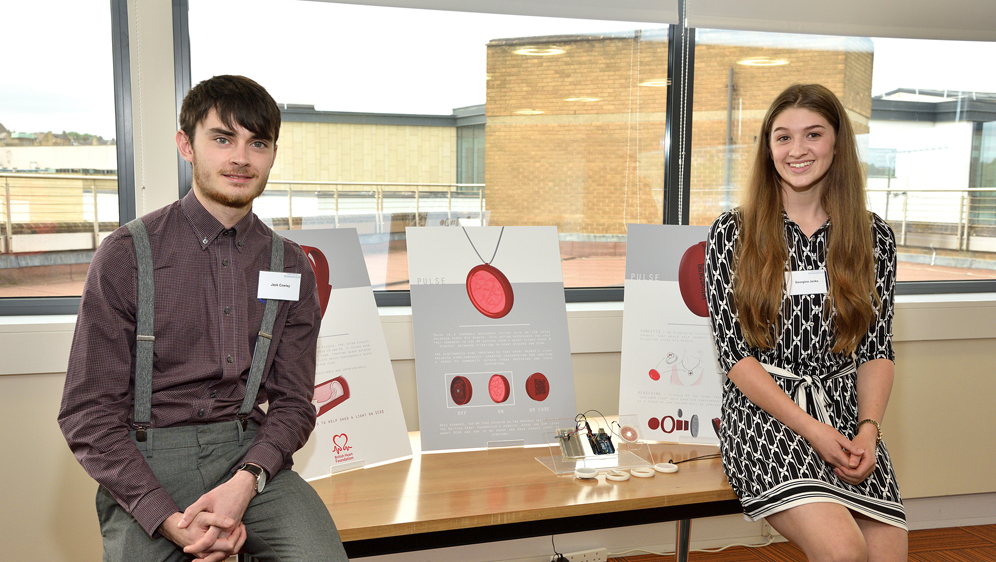 Above - Jack Cowley and Georgina Jenks with their device named Pulse 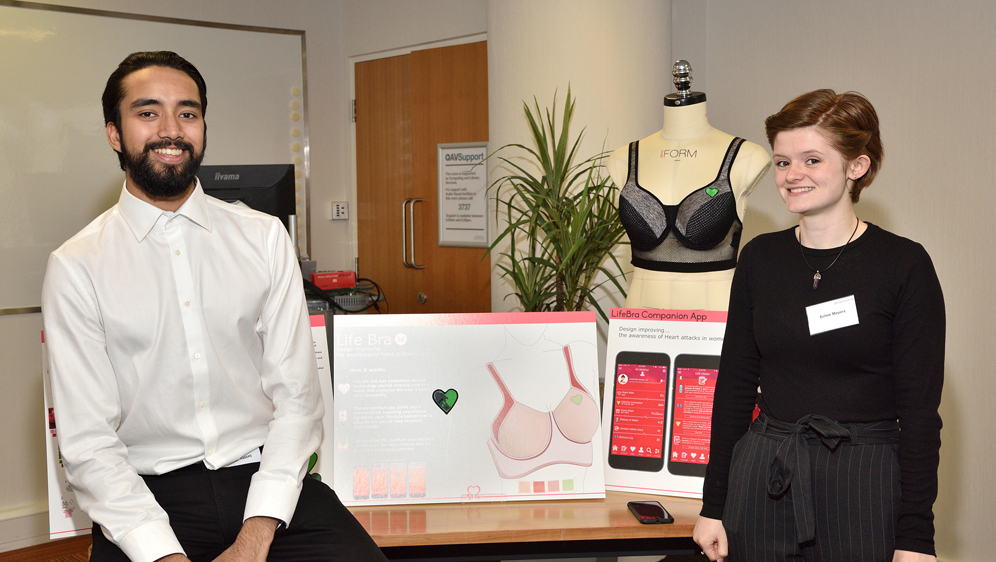 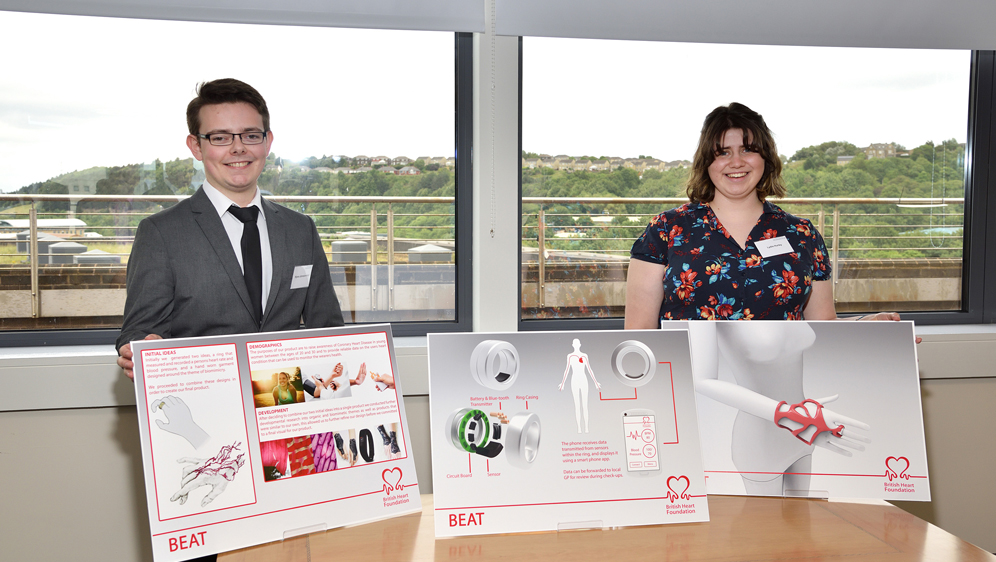 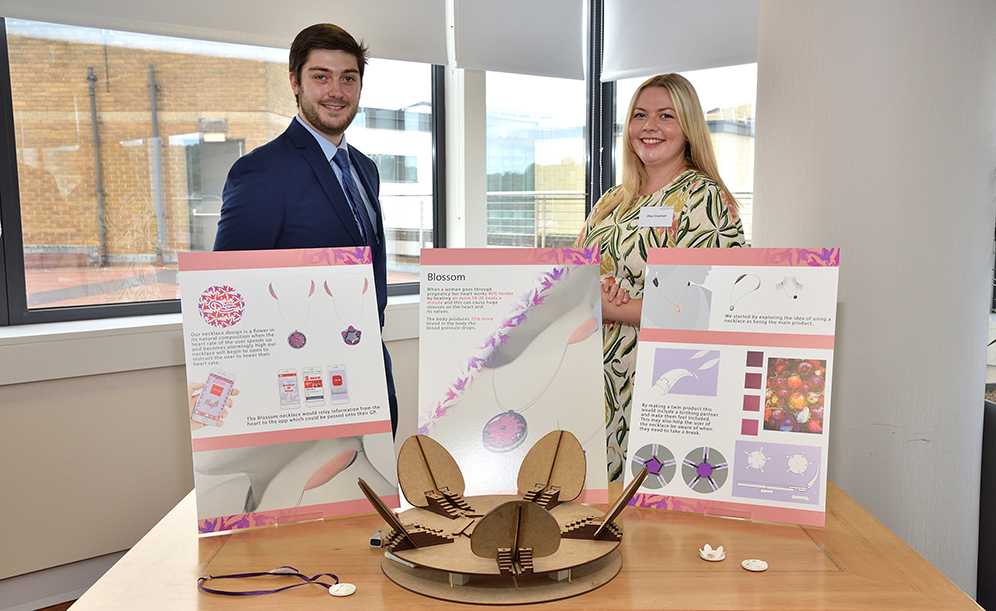 Above - James Seal and Ellen Crackness with their device named Blossom