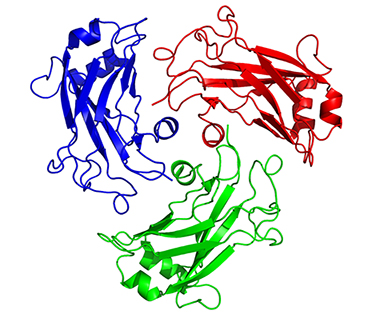 SCIENTISTS at the University of Huddersfield are the first to arrive at a deep understanding of a molecule that destroys cancerous tumours without harming healthy cell tissue.  The discovery opens up the potential for highly effective new cancer treatments that are free of serious side effects.

A new journal article describes the science behind the breakthrough.  Now the research team headed by Dr Nikolaos Georgopoulos has developed and patented a cancer treatment regime that exploits the unique properties of the molecule – a protein named Cluster of Differentiation 40 (CD40) (pictured right). The next phase is to secure funding for clinical trials.

Dr Georgopoulos is a specialist in cancer research and he has been investigating CD40 for almost 16 years.

“In 2002, we first reported that this particular member of the TNF receptor family is unique,” he said.  “A lot of members of this family are very good at triggering cell death.  But the molecule CD40 is special.  It seems to specifically kill tumour cells, but when you activate it on normal cells, they don’t die.”

It was vital to understand these remarkable properties of CD40, with their immense potential for cancer therapy.  Years of investigation began to unlock the mystery.

“Cancer therapies, such as chemotherapy and radiotherapy, are ‘hit with a hammer’ approaches.  Hit as hard as you can and kill the tumours as well as you can.  But there is usually some collateral damage.  There are side effects,” said Dr Georgopoulos.

“We knew this CD40 molecule seemed to be very good at killing tumour cells.  So we decided to observe what it does at the molecular level.  If we understand what it does and what’s so special about it, we can design our own way to kill tumours.  We have now identified exactly why this molecule can kill tumour cells and why it leaves normal cells unaffected.”

Tumour cells proliferate by continuously dividing.  This places them under considerable stress, but they have developed protective properties that enable them to cope.  CD40 removes this protection so that the tumour cells die, but because normal cells are not placed under “oxidative stress” they are unharmed by the protein. 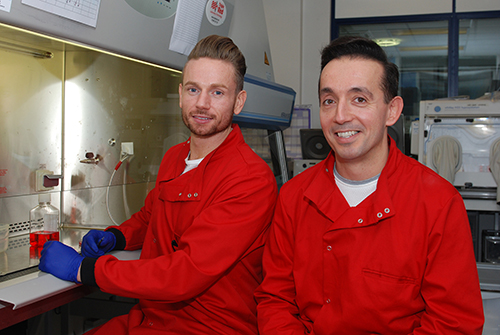 A big proportion of research leading to the breakthrough was conducted by Dr Chris Dunnill who is pictured left with Dr Nikolaos Georgopoulos (right).

Dr Georgopoulos and his co-researchers at the University of Huddersfield made this discovery because instead of working purely with tumour cells, they were able to make comparisons with the effects of CD40 on normal cells as well as engineered – para-malignant – cells that allowed them to mimic the process of carcinogenesis – cancer development.

The team has also worked on a method of using CD40 in targeted, intravenous bio-therapy by discovering the best way to deploy the molecule – using its ligand to activate it.  The discovery has been patented, and the University is exploring commercialisation through a spin-out company – provisionally called ThanatoCure™ – Thanatos is the Greek word for ‘death’, referring here to cell death.

Advanced discussions are being held with a company that specialises in early-stage development of innovative cancer therapies.  It is hoped that the company will secure funding in the region of £900,000 for clinical trials that would see colorectal cancer patients receiving the new treatment. The trials could start as early as the end of 2017.

A big proportion of research leading to the breakthrough was conducted by Dr Chris Dunnill, during and beyond his PhD, supervised by Dr Georgopoulos.  Also part of the research team – and co-contributors to the new article in a leading journal – were PhD students Khalidah Ibraheem and Albashir Mohamed, supervised by Dr Georgopoulos, and Professor Jenny Southgate from the Department of Biology, University of York.