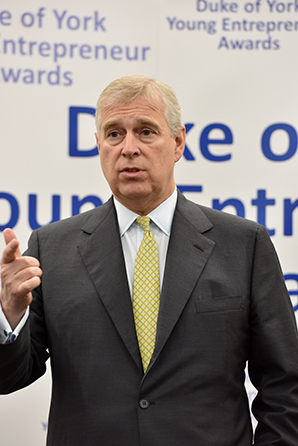 THE UK needs to grow new businesses, and universities provide an ideal environment for fostering new entrepreneurs and problem-solvers, said HRH The Duke of York (pictured left) when he bestowed his latest set of awards to enterprising Northern students.

This is the fifth year in which The Duke of York Young Entrepreneur Awards ceremony has taken place at the University of Huddersfield, where His Royal Highness is Chancellor.  In attendance were entrepreneurial students from 16 universities in Yorkshire, Lancashire, Durham and Northumbria. 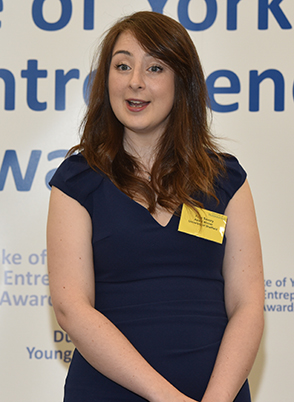 The businesses launched by the students included a design agency, a software developer, a video production company, a manufacturer of ladder safety equipment, an eco-friendly fashion label and the inventor of smart technology that ensures that people stave off dehydration.

There were also food and drink businesses, including an innovative beer company, a Thai street food vendor and a producer of luxury chocolate.

Five of the award-winning businesses were selected to give a 60-second pitch to the audience, which voted for a winner.  This year it was Faye Savory (pictured right), from the University of Sheffield, whose business named BearHugs offers a range of gift boxes specially tailored for loved ones.

The 2017 Duke of York Young Entrepreneur Awards took place in the University of Huddersfield’s new £28 million Oastler Building, which The Duke officially opened later in his visit.

The awards ceremony was opened by the Vice-Chancellor of the University of Huddersfield, Professor Bob Cryan.  He said that The Duke of York Young Entrepreneur Awards were directly inspired by His Royal Highness’s passionate conviction that the future prosperity of the UK depended on innovative entrepreneurship among young people.

“Universities such as ours are the places where these young people not only acquire the technical expertise they need, but also the entrepreneurialism that can turn their ideas into business propositions. 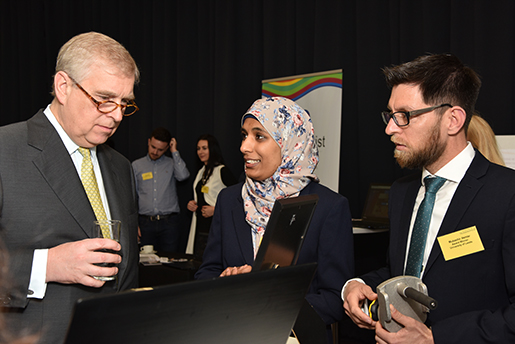 ‌“Their universities also provide them with practical support, including advice and facilities. Here at Huddersfield, for example, we are home to the aptly-named Duke of York Young Entrepreneur Centre, with its team of advisors,” said Professor Cryan.

After the Duke had presented certificates to all of the award-winners, he spoke of the importance of entrepreneurship and how the students who had successfully launched their enterprises could act as role models for others.

“All of you will have faced challenges and come up with similar problems that needed solving.  Universities are good places at being able to solve those problems,” he said.  Now the challenge is to gain access to the networks that could aid the development of their businesses.”

He stressed the importance of gaining experience of developing a business and urged other students to take the plunge.

“If you have something you really want to pursue, then get on with it!” he said.

The Duke then spoke individually to the young entrepreneurs behind all of the 16 fledgling businesses.

The 2017 Duke of York Young Entrepreneur Awards were hosted by Philip Clegg, who is the University of Huddersfield’s Head of Student and Graduate Business Start-Up.

During his latest visit to Huddersfield, The Duke also presided over the regional launch of the Inspiring Digital Enterprise Awards (iDEA), a new scheme that he inspired.