The forgotten man and his work… remembered

Few have heard of Huddersfield statistician George H. Wood, whose work is archived in Heritage Quay, but now his work has been brought to life by the University’s motion graphics students 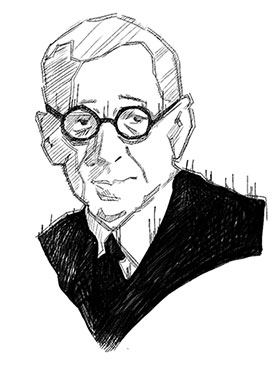 GEORGE Henry Wood was an avid statistician whose facts and figures about the working poor in early 20th century Britain are of special interest to historians, who are able to examine them in a special archive collection at the University of Huddersfield.  Now, G.H. Wood has proved to be an inspiration to another group – students who are developing skills that will equip them for careers that include designing title sequences for TV programmes.

They have produced a series of short films that explore Wood’s legacy and draw on his statistical findings.  These have already had a public exhibition and can be seen online at a special website.

The University offers a variety of courses in graphic design and animation, with motion graphics – used in mainly commercial contexts such as television – being one of the disciplines, tutored by lecturer Sara Nesteruk, an experienced professional in the field.

In conversation with Lindsay Ince, an archivist at the University award-winning Heritage Quay archives centre, Sara learned about the George Henry Wood Collection, which consists of a large number of pamphlets, books and manuscripts packed with sociological statistics.

“The collection is so intriguing and the material seemed to offer a good opportunity for a creative response,” said Sara, who has formed a motion graphics club for students on graphic design and animation courses.  It is named Motion-go and samples of the work of club members have been posted on a vimeo site.

Six members of the club took up Sara’s idea and paid visits to Heritage Quay, delving into the G.H. Wood Collection.

Statistical information on topics such as death rates, health issues, wage levels and pay differentials between men and women in the early 1900s were highlighted in the short sequences created by the students.  They also developed their own varied interpretations of a portrait of Wood, who was born in 1874 and died in 1945.

“The students went back to Heritage Quay a few times and responded very well to the material,” said Sara.  “They wanted to take the statistics and do creative things with them.  They also found out about George Henry Wood and responded to that.”

The sequence of motion graphic films had been exhibited publicly at Huddersfield’s Piazza Centre, and details of the project will be kept at Heritage Quay – meaning it will be stored in the same archives that inspired it.

Lecturer Sara Nesteruk is a motion graphics and animation specialist who has produced work, including title sequences, for employers and clients that include BBC Sport, the National Theatre, Channel 4 and TV production company Endemol.

She is currently engaged in a doctoral project titled Recipes for Baking Bread, which will be a series of short films exploring the famine induced in Ukraine by Stalin in the 1930s.  The title stems from the appropriation of grain when farms were collectivised.  Sara’s grandparents were Ukrainian.