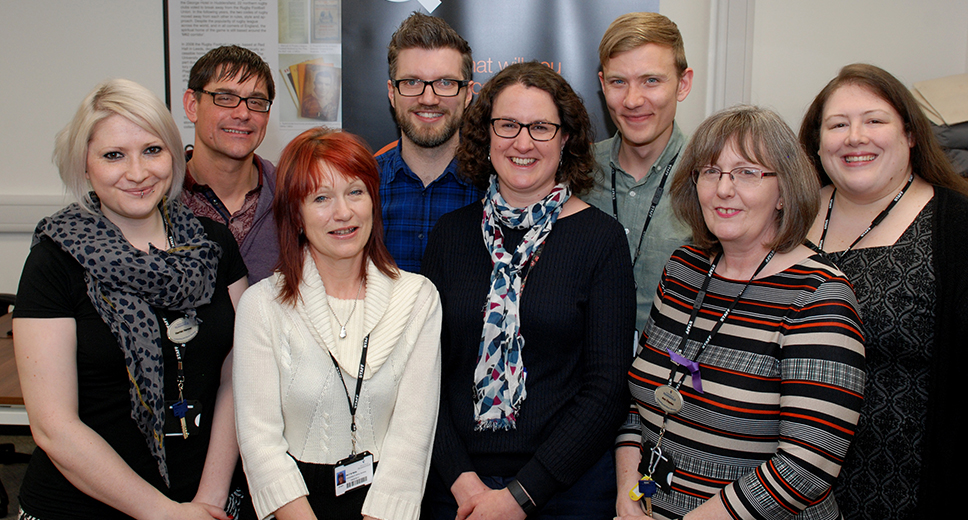 LEADING figures from the National Archives, based at Kew, came to the University of Huddersfield to bestow one of the most sought-after awards in the sector.

The University is the home of Heritage Quay, a £1.6 million, technologically-advanced archives centre that is highly accessible to the general public and specialist researchers alike.  Now, it has officially been declared an Accredited Archive Service.

This is a distinction awarded by a panel including the National Archives and the Archives and Records Association.  The certificate states that the aim is to “ensure the long-term collection, preservation and accessibility of our archive heritage”.  Accreditation is a UK quality standard “which recognises good performance in all areas of archive service delivery”.

It was announced earlier this year that Heritage Quay – after an exhaustive application and validation process – had been granted Accredited Archive Service status.  The award has now formally been made at a ceremony attended by Caroline Ottaway-Searle, who is Director of Public Engagement at the National Archives, and Melinda Haunton, their Programme Manager for Accreditation. 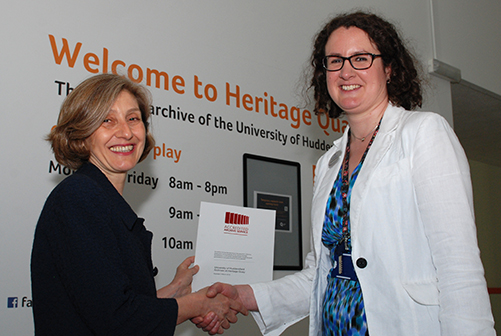 ‌Members of the Heritage Quay team was present to receive the award, alongside University of Huddersfield Archivist and Records Manager Sarah Wickham, Director of Computing and Library Services Sue White and Deputy Vice-Chancellor Professor Tim Thornton.

The nine-strong team at Heritage Quay worked on the substantial submission that was required to apply for accreditation.  It appraised factors such as repository standards, the range of public services offered, the policies and procedures in place for managing and cataloguing collections, and the outreach activities taking place amongst a wide range of audiences.

After the document was completed, Accreditation Assessors from across the archives sector visited Heritage Quay to validate the submission.

Out of some 2000 archives in the UK, Accredited status has so far been awarded to 45.  The University of Huddersfield joins a list that includes the National Archives themselves, plus London Metropolitan Archives, Lancashire Archives, the National Records of Scotland, the Churchill Archives Centre and the National Library of Wales. 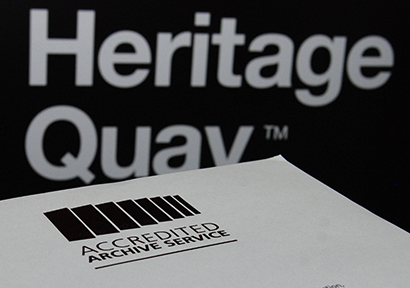 When it announced that Heritage Quay had joined the list, the Accreditation Panel cited “the recent years of hugely impressive development to this archive service, and the overall uplifting and positive impression of the service in this application”.

It added that “outputs of recent years included a very sound policy basis for the service to develop in future, in addition to the significant achievements supported by a major grant award”.

“It recognises the high-quality work we do,” she added.  “We are a relatively new team, so to achieve this endorsement in such a short space of time is absolutely fantastic.”