The Kirklees food hub would improve the district’s health and wellbeing and boost the local economy, according to Dr John Lever’s report 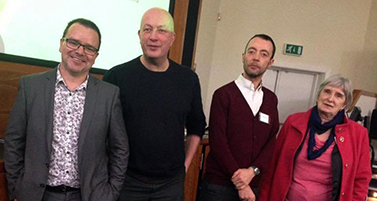 A NEW Kirklees “food hub” – headed by a chief executive and linking producers with a wide range of organisations and community groups – would improve the district’s health and wellbeing and boost the local economy.  This is a recommendation that emerges from a new report summarising a nine-month research project carried out by the University of Huddersfield’s Dr John Lever, an expert on sustainable communities and food systems.

The report describes and praises many aspects of food strategy and community developments in Kirklees, but it also flags up causes for concern, such as a decline in attendance in local farmer’s markets and food festivals in the district.  They are being shunned by some producers because of higher rents and lower takings.

Larger food festivals run by Kirklees Council are seen to focus on bigger businesses from outside the area at the expense of local enterprise, claims the report, which adds that many of the district’s producers were looking to attend markets outside the area.  North Yorkshire has developed a food hub so successful that some Kirklees artisan food producers have even considered relocating there.

There is no prospect that modern Kirklees could become self-sufficient in food.  This would need the cultivation of twice as much land as the acreage of the district.  But its food strategy could be driven to the next level with the development of a local food partnership and food hub infrastructure, according to Dr Lever’s report.

The concept of a regional food hub – which offers services such as help with distribution, storage and marketing so that local producers can boost their market share – is well-advanced in the USA. But there are also pioneering examples in the UK, and Dr Lever researched several of them.

He believes that the best model for Kirklees to emulate would be the Brighton and Hove Food Partnership, a not-for-profit company that stresses – in its own words – “social equity, economic prosperity, environmental sustainability, global fair trade and the health and wellbeing of all residents”.

For a food hub to be successful, it must have the funding to appoint a chief executive with good leadership skills plus a full-time staff, states Dr Lever’s report, which is entitled Developing a Strong and Sustainable Food Economy in Kirklees.

It was commissioned by Kirklees Public Health Directorate and launched at a University of Huddersfield event organised by its Centre for Sustainable and Resilient Communities, based in the Business School.  After a welcome from Councillor Viv Kendrick – who holds the Kirklees Council cabinet portfolio for public health – there was an introduction from Tony Cooke, who is the local authority’s Head of Health Improvement.

His presentation asked Can we design a healthier food system in Kirklees? and he discussed obesity problems and the fact that poor diet had now overtaken smoking as the main cause of disability.  Obesity also contributes to conditions such as Type II diabetes and hypertension.  Fewer people are buying healthy food and poor diet and inactivity are increasingly concentrated in deprived areas, said Mr Cooke.

The response in Kirklees has included a Good Food Charter and the district is also part of the Sustainable Food Cities Programme.

Also speaking at the University of Huddersfield launch event was Matt Jones, who is Associate Professor of Public Health at the University of the West of England.  He told how he had included Kirklees in his research on behalf of the national scheme Food for Life, which has a primary focus on schools, encouraging them to grow their own food, source food from local producers, provide cooking and growing clubs for pupils and their families and serve freshly prepared, well-sourced meals.

“When we talk about healthy and sustainable food, the image that comes up is often ‘posh food for posh people’,” said Professor Jones.  But Food for Life was a scheme that operated in some of the most deprived areas of the country.

When he researched Kirklees – where school catering services are still entirely run by the local authority – Professor Jones worked out the Social Return on Investment (SROI) ratio of its participation in Food for Life.  He concluded that a total investment estimated at £196,803 had yielded £810,661 in social value.  This included a boost to local food businesses and their employees, plus public health benefits and environmental gains.

The launch event was attended by some 50 people, many of whom are involved in food production, sales and distribution in Kirklees.  The concept of a food hub for the district was discussed in special workshop sessions and a further meeting to discuss the project is planned.