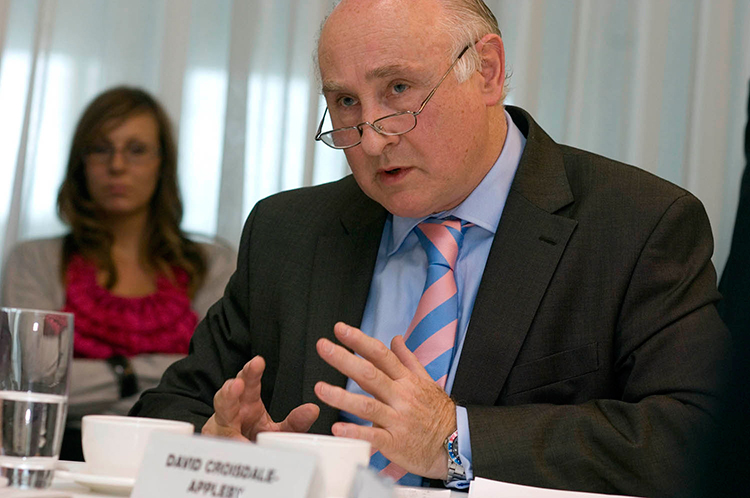 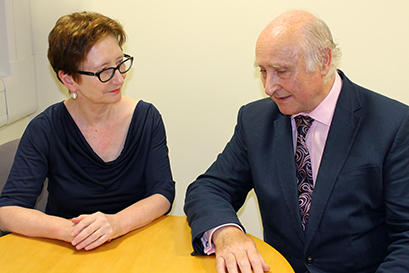 A PROFESSOR whose detailed investigation of social work education in the UK has influenced Government policymaking will now work closely with students and researchers at the University of Huddersfield.

It was in 2013 that David Croisdale-Appleby – who has a highly diverse portfolio of health and social care posts in the academic, public and voluntary sectors – was commissioned by the Minister of State for Health to carry out an independent review of social work education.  A report was published in February 2014 and won plaudits for its analysis and its recommendations, designed to raise the calibre of social workers.

They include a call for entry standards to the profession to be raised; for students to be provided with varied and high quality practice placements; for innovative, fast track routes into social work qualification; and for licenced social workers to undergo revalidation every five years.

Now Professor Croisdale-Appleby has been appointed a Visiting Professor at the University of Huddersfield, where the School of Human and Health Sciences offers a range of undergraduate and postgraduate social work courses.

The post was offered after talks with the University’s Professor of Social Work, Brid Featherstone (pictured left), whose eminence was the clinching factor in Professor Croisdale-Appleby’s decision to accept a role at Huddersfield, a role that will include public lectures, seminars and research work with students – plus engagement with the wider community.

“The community is clearly extraordinarily important to the University, and it is that symbiotic relationship that attracted me hugely to Huddersfield,” said Professor Croisdale-Appleby.

“A university is an agent of change within its community and I sense there is an ethos within the University of Huddersfield that sees itself as a society integrator and a society builder.  That is immensely attractive to me, concerned as I am about trying to create a better society for a much broader range of people.”

Professor Croisdale-Appleby – whose review calls for a new “strategic workforce planning system” for the social work profession – said that he had also been impressed by statistics for the employability of Huddersfield students. 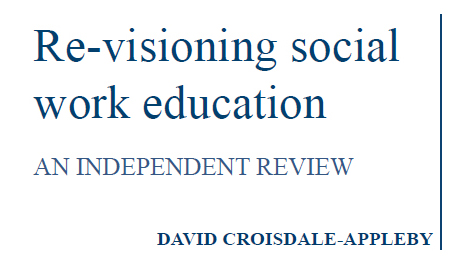 The report of his independent review is titled Re-visioning social work education.  In his preface, he explains his choice of words by writing that that in a rapidly changing world, a “re-visioning” of social work was needed “if we are to equip the profession…to realise its potential to impact upon our society in the early 21st century”.

Although there have been great changes in Government since the report was published, the Croisdale-Appleby Review continues to underpin the changes the government is making to the social work profession and social work education, including qualifying education, continued professional development and regulation.

“There was a formal Government response at the end of 2014, which was to accept many of the findings and recommendations.  Since then, the main thrust of the report has been accepted by the Department of Health and the Department of Education and its recommendations form the basis for the strategic planning for the future of social work education.”

Professor Croisdale-Appleby said that he wants higher qualification thresholds for social work because is an “extraordinarily complex subject” that draws on six different academic disciplines.  This broad span that is unique among the professions, he claimed, so it is essential that social workers are educated and trained to the highest standards.

He has also argued for a more stringent regulatory regime for social workers, and that there should be a single generic initial qualification to enter the profession.  This is because a holistic rather than specialised approach is often vital.

“We deal with adults and children in their environment, which can be a traditional family or a very unconventional and different collection of people.  So it is not the right approach artificially to divide them into silo groups such as “just children”, or to recommend interventions that are purely to do with single issues such as drug and alcohol dependency and misuse, or just deal with mental health conditions,” he explained.

“If you are looking at a troubled child you need to understand how the adults in that family are handling things like health conditions, debt, mental health, housing, and relationship issues.  Unless you have that understanding of adults you won’t necessarily come up with the right answers for children, and vice versa.”

Professor David Croisdale-Appleby holds, and has held, many ministerial appointments and is actively involved in policy formulation in health and social care.  He is the Chair of Dementia UK, the Standing Commission on Carers and of the Independent Advisory Group on Carers.  A professor at the Wolfson Research Institute, at the School of Medicine and Health at Durham University and at the Durham Business School, he was until recently Chair of Skills for Care, Skills for Care and Development, and of the learning disability trust, Hft, and is a Director of Health Education England.  At NICE, Professor Croisdale-Appleby is Chair of the Public Health Advisory Committee, and has chaired the creation of national guidance on long-term sickness and capacity, the care of people with dementia, prevention of the misuse of drugs, and physical health and the environment.  He is the Honorary Ambassador for the United Kingdom to the Nelson Mandela Legacy Project, the Childrens’ Hospital for the 15 nations of the Southern Africa Development Community.  He was awarded the OBE for his work for social justice and holds honorary degrees from a number of universities for his work in health and social policy.