Busy day on campus for the University’s Chancellor 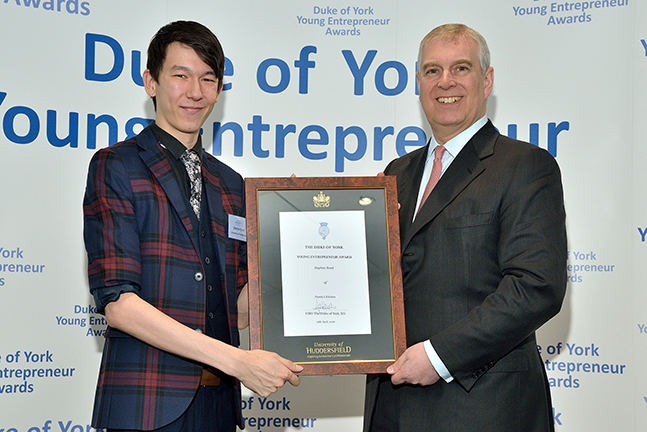 ON his latest visit to the University of Huddersfield, His Royal Highness The Duke of York, KG, met some of the brightest young businesspeople in the North of England and he hailed the burgeoning role played by universities in boosting enterprise.

His Royal Highness is Chancellor of the University of Huddersfield, which for the past three years has hosted The Duke of York Young Entrepreneur Awards.  Previously, limited to undergraduates and recent graduates of Yorkshire universities, the scheme has now been opened up to the whole region.  As a result, the 2016 contest had finalists from 19 universities throughout the North. 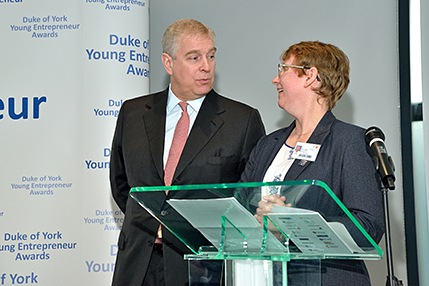 ‌After the prize ceremony, The Duke said that he was highly impressed by the standard of entries to the 2016 awards and commented that: “In the past, entrepreneurship and universities haven’t necessarily been as culturally united as they are today.  Now, when I go about universities, the more I see them encouraging students, both undergraduates and graduates, to start their own businesses.” 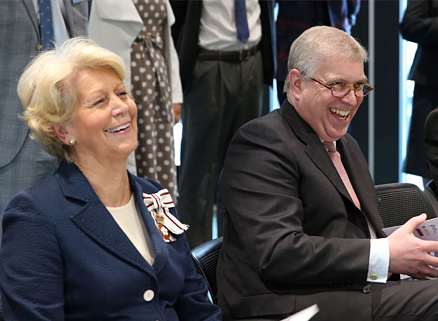 ◄ The Lord-Lieutenant, Dr Ingrid Roscoe, and HRH The Duke of York at the Awards Ceremony

‌‌He said that he was keen to quiz the finalists on the inspiration for their businesses and on their plans for the future.

‌“Congratulations to all of you for what you have been through in terms not only of starting but growing your businesses, and I wish you all every success,” said His Royal Highness.

‌‌In his welcome speech, Professor Cryan described The Duke of York as the “entrepreneur-in-residence at Buckingham Palace” and a global entrepreneur who had backed some “amazing” initiatives such as Pitch-at-the-Palace as well as the annual Duke of York Young Entrepreneur Awards. 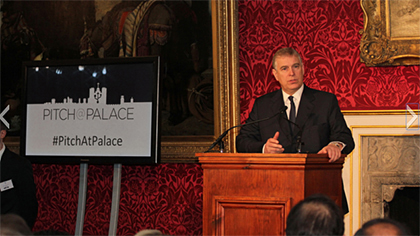 Professor Cryan also told the audience that the University of Huddersfield was currently celebrating the 175th anniversary of the institution from which it is descended.  Archives show that early students had founded enterprises that grew into the Tetley tea business and the Post Office Savings Bank – a lesson for today’s entrepreneurial students, that they too could create amazing businesses.

After speaking to all of the Young Entrepreneur Awards finalists – who included University of Huddersfield graduate Stephen Bond, founder of the liqueur business Panda’s Kitchen –The Duke then met a group of students who are completing foundation courses at the International Study Centre, delivered at the University of Huddersfield by the global training and education company, Study Group. 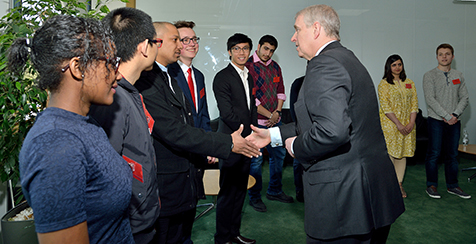 The students who met the Duke were from countries that included China, Nigeria, Vietnam, Pakistan, Ukraine, Qatar and Belarus.  Once they have completed their foundation courses – designed to burnish their English language skills and accustom them to the UK’s educational culture – they will move on to degree courses in subjects that include architecture, engineering and product design.

The Duke asked a series of detailed questions about their experiences of coming to study in Huddersfield and said he hoped that their time in the UK would be beneficial and fruitful.

After a lunch hosted by the University of Huddersfield, His Royal Highness then moved on to its sports hall, where he presented The Duke of York Community Initiative  Awards, bestowed on successful community projects in Yorkshire.