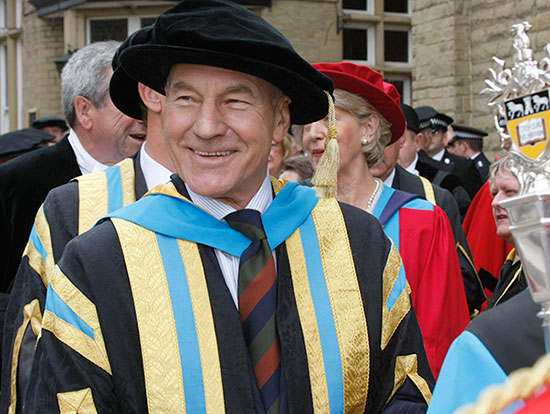 FAMOUS actor Sir Patrick Stewart has relinquished one of his most successful and longest-running roles by announcing that after more than a decade he will soon step down as Chancellor of the University of Huddersfield.

Sir Patrick – who is celebrated for his classic stage performances as well as TV and film roles, including Captain Picard in Star Trek: The Next Generation – was born in Mirfield, meaning that Huddersfield is effectively his hometown university.  And it was a major coup to secure a global stage and screen star as University Chancellor, especially as Sir Patrick (pictured below working with the University's drama students) was determined to be highly active in the role. 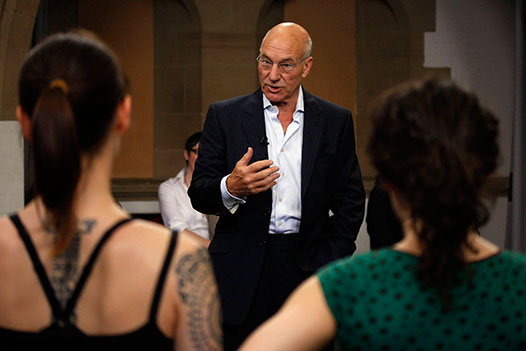 He regularly presided over events such as graduation ceremonies, often leading processions through the streets, wearing his Chancellor’s robes.  He met large numbers of students and staff and acted as an overseas ambassador for the University of Huddersfield during his travels and on official visits to destinations, such as Hong Kong and China.

The Vice-Chancellor of the University, Professor Bob Cryan, said: “Naturally, we are very sorry that Sir Patrick has decided to call it a day.  But we feel proud and privileged to have had him as our Chancellor for so many years.  I think he must have been the most prominent and most admired chancellor in the whole UK university sector.  He was always determined to be much more than a figurehead and he made a real contribution to the progress of the University of Huddersfield.

“He has a strong sense of social justice and he is just as passionate as I am about ensuring that young people fulfil their potential, no matter what their background.  That is why he has been such a good fit with the University of Huddersfield – that and the fact that he is a dedicated Huddersfield Town fan!”

It is expected that Sir Patrick will step down as Chancellor after this summer’s graduation ceremonies, but as yet there is no news of a successor.  “The one certainty is that he will be a very hard act to follow!” said Professor Cryan.

Patrick Stewart – knighted in 2010 – was invited to become Chancellor of the University of Huddersfield in 2004, by then Vice-Chancellor Professor John Tarrant.  The actor later said that the offer was “astonishing because it was entirely unexpected and unlooked for”.  He immediately told Professor Tarrant that “I won’t accept the honour – I will grab it with both hands!”

Sir Patrick had been based in the USA for some time, and he acknowledged that the Chancellorship was a catalyst for his decision to relocate to the UK and reignite his stage career, which he did to great critical acclaim, while sustaining his film and TV stardom.

In 2009, Sir Patrick agreed to a second term as Chancellor, stating that he had no hesitation in renewing his role and that he had been “inspired, and at times humbled by the achievements of our students”.

Sir Patrick’s links with the University will continue, as he will become Emeritus Chancellor – and he is determined to continue to act as an ambassador for the institution.  He said:  “I am extremely proud of the University of Huddersfield and all it has achieved.  Although I am standing down from my role as Chancellor you can be sure I will still be taking every opportunity to talk about the University and I look forward to continuing to meet Huddersfield graduates around the world.”