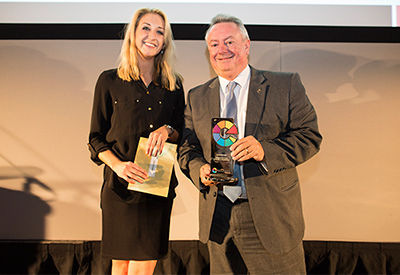 THE University of Huddersfield is a double winner in a new awards scheme designed to celebrate the crucial role of Higher Education in the “Northern powerhouse”.

At the inaugural Educate North Awards, Huddersfield was named New University of the Year, and its Vice-Chancellor, Professor Bob Cryan CBE, won the Leadership Award.  A panel of more than 20 leading figures from the fields of education, business and politics selected the winners, who were announced at a ceremony in Manchester.

Professor Cryan - who was present at the event - said that he was delighted by his personal victory and by the title bestowed on the University of Huddersfield.  “We’ve won a lot of awards in recent years, but the excitement and the pride never fade.  Every prize like this is a tribute to the hard work of our staff and students in making sure that our University continues to make remarkable progress,” he said.

Educate North – backed by The Telegraph Media Group in association with UMIP and Barclays - was launched this year in order to celebrate the excellence of the Northern education sector, seen as crucial to the economic future of a region that the Government has dubbed a potential “Northern powerhouse”.  There were seventeen awards and Universities from across the northern region made the  shortlist including Liverpool, Lancaster, Leeds, Hull, York, Newcastle and of course Huddersfield. 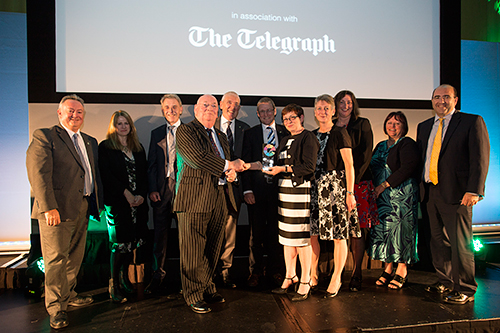 ‌In addition to the awards ceremony, the inaugural Educate North event also featured a conference at which speakers discussed the importance of the region’s universities in sparking innovation and excellence.

There was a shortlist of three for the title New University of the Year – sponsored by John Kennedy CBE - Huddersfield being selected as the winner. The term “new university” is used in the sector to describe institutions which made the transition to full university status in the early 1990s.

Professor Cryan’s Leadership Award comes in the year that he received his CBE, bestowed at Buckingham Palace for his contribution to Higher Education.  He has been Vice-Chancellor of the University of Huddersfield since 2007 and is a past winner of the Guardian Inspiring Leader of the Year Award.  His role in the economic regeneration of the North has included chairing the Business Innovation Growth panel of the Leeds City Region and membership of the Leeds City Region LEP Board.  Also, he is a Deputy Lieutenant for West Yorkshire.

When the University of Huddersfield made its official submission to the Educate North Awards - leading to the New University of the Year title – it stressed its role in the regional economy.

“We are internationally engaged, but also a product of the traditions and values of industrial Yorkshire and the North of England and dedicated to making a key contribution to the economic regeneration of the region through teaching, research and entrepreneurialism.”

‌In addition to victory in two categories at Educate North, the University of Huddersfield was also shortlisted for  Research Project of the Year.  This was for Extended Play, an innovative new publishing platform developed by Professor Alex Coles (pictured left) of the School of Art, Design and Architecture.

Speaking about the new awards scheme, Professor Phil Harris, chairman of the judging panel, welcomed the recognition given to northern institutions, saying many were beginning to challenge the authority of the 'golden triangle' universities of Oxford, Cambridge and London, especially in science, technology and engineering.