The University welcomes local schoolchildren to examine the Great War 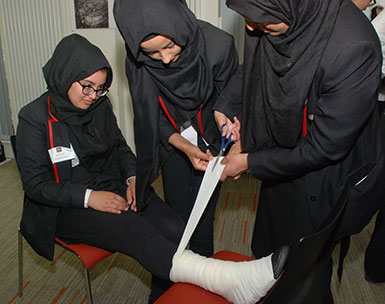 IT happened 100 years ago and was fought overseas, but a large group of teenagers felt much closer in time and space to World War One after attending a special educational event at the University of Huddersfield.  As well as the military horrors of 1914-18, the pupils learned about the science and medicine of the period, its art and music and the impact that the conflict made on their own towns and streets.  They even encountered some of the ghosts and spirits of the Great War.

For the second year in succession, the University invited schools from the region to send parties of pupils to take part in a multi-themed educational event commemorating World War One.  There was a total attendance of more than 80 14-15-year-olds from Yewlands Academy, Grenoside, near Sheffield; Halifax High School; Belle Vue Girls’ School, Bradford; and Westborough High School, Dewsbury.

On arrival, the students were divided into different ‘regiments’ and after a opening talk from history lecturer Dr Rob Ellis, they split up to attend a wide variety of workshops delivered by members of the academic staff and by doctoral students. 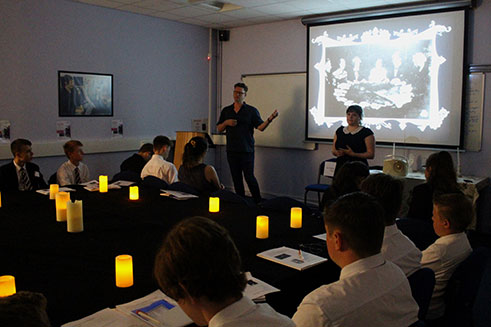 Dr Ellis opened by stressing the global nature of the Great War and the sense of distance from the conflict, all the greater now that its last surviving combatants had died.  He decided to shrink that distance by researching episodes from the Home Front that were close to the location of the four schools in attendance.  They included a fire disaster in Bradford that was hushed up by censors so as not to dampen morale; the internment of foreigners in Sheffield; and an episode in which a Halifax girl falsely represented herself as a nurse on the Front.

The workshop sessions were delivered by experts from several of the University’s academic schools.

Neil Simmonite, who heads the Division of Podiatry and Clinical Sciences, plus Senior Lecturers in adult nursing Carl Covill and Warren Gillibrand, with Senior Lecturer in Podiatry Peter Roberts demonstrated how injuries were treated in 1914-18.

Creative writing lecturer Dr Simon Crump analysed the letters written by prisoners of war and Senior Lecturer in Musicology Dr Lisa Colton introduced and discussed the music that was current at the period.  This included popular wartime songs plus pre-war compositions by George Butterworth – who perished in the conflict – and Ralph Vaughan Williams.

Professor Rob Brown and Dr Jeremy Hopwood, of the Department of Chemical Sciences, led a workshop that dealt with science and the Great War.  Eve Hartley and Robert Piggott – who are PhD students with the Heritage Consortium, in which the University of Huddersfield is a partner – displayed a wide range of images of the war, including harrowing artworks and propaganda posters.  Workshop participants were invited to give their response.

One of the most dramatic sessions was named The Undead of the Great War, presided over by English lecturer Dr Merrick Burrow, in tandem with PhD student Jo Dyrlaga.

The darkened seminar room was adorned with images and paraphernalia of spiritualism, and the atmosphere of a séance was recreated – with an attempt to simulate a ghostly manifestation.  The Great War – with its tragic death toll – was accompanied by a resurgent interest in spiritualism and attempts to contact the departed.  Dr Burrow is an expert on the author Sir Arthur Conan Doyle, an avowed believer and propagandist for spiritualism.

The day closed with students from the participating schools reconvening for a competition and quiz that tested their knowledge of the Great War.