HRH The Duke of York installed as University Chancellor 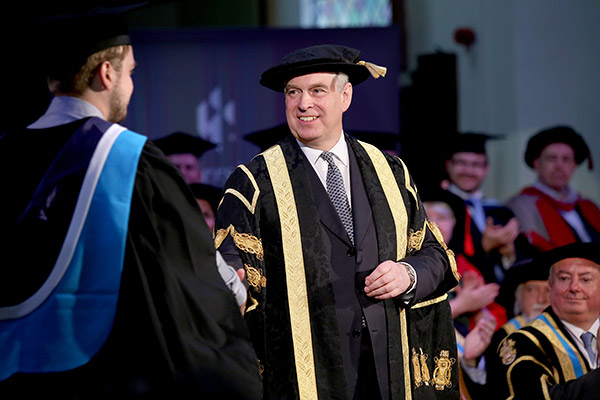 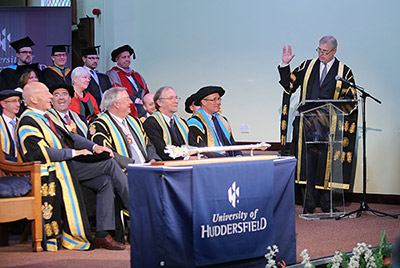 WHEN he was ceremonially installed as Chancellor of the University of Huddersfield, His Royal Highness The Duke of York, KG, pledged that he would be “hands-on” in the role and that he would continue the legacy of his predecessor, Sir Patrick Stewart.  He finished by urging the ex-Star Trek actor to “Live long and prosper” – a catchphrase from the series – and even gave Mr Spock’s Vulcan salute!

At the same ceremony, Sir Patrick – who relinquished the Chancellorship after 11 years – received the title Chancellor Emeritus and said this was a “delightful and happy solution” that meant he could retain his close connection with the University.

“I could be your understudy!” he said to the Duke, who occupied the stage alongside him at the University’s St Paul’s Hall.  On occasions when His Royal Highness was unable to attend an important function, then Sir Patrick might take his place, said the actor.

Installation of the new Chancellor

The installation of His Royal Highness took place during the second of the day’s graduation ceremonies.  First, the Duke of York received an Honorary Doctorate of the University and he received a tribute from the Vice-Chancellor, Professor Bob Cryan CBE.

He said that The Duke had “worked tirelessly to promote the economic growth of the United Kingdom”.

“He quickly realised that the creation of skilled jobs is a key element.  In particular, His Royal Highness believes that the Britain’s continued economic well-being will depend on young people’s access to education and the opportunities to develop relevant skills.

‌“His Royal Highness also realises that it is vital to develop a culture of entrepreneurship that will provide new opportunities in tandem with technology.  All of these things mean that His Royal Highness The Duke of York has a natural ally in the University of Huddersfield, where entrepreneurialism is an essential component of our education and our philosophy.”

Before accepting the Chancellorship, The Duke was already Patron of the University, which is home to The Duke of York Young Entrepreneur Centre.

In the video Peter Jones, businessman and entrepreneur, offers his congratulations to HRH The Duke of York on his installation as Chancellor of the University.

Students from the University’s School of Computing and Engineering received their awards, shaking hands with both the Duke of York and Sir Patrick as they progressed across the stage.  The Duke then closed the ceremony – one of 31 taking place during the week – with a speech in which he used an analogy from his naval career, comparing the handover from Sir Patrick to a change-of-command.

He outlined some of the University’s successes and its awards, and its emphasis on the employability of graduates.

“This university is going places!” he said.  He congratulated graduates and urged them to retain contact with the University.  His Royal Highness closed the ceremony by repeating his thanks to Sir Patrick and raised a final laugh by urging the actor to “Live long and prosper” and giving the Vulcan salute.

The ceremony included a tribute to Sir Patrick by Professor Cryan, who praised the actor’s continual desire to take in new challenges, shortly to include a starring role in a new U.S. sitcom named Blunt Talk. 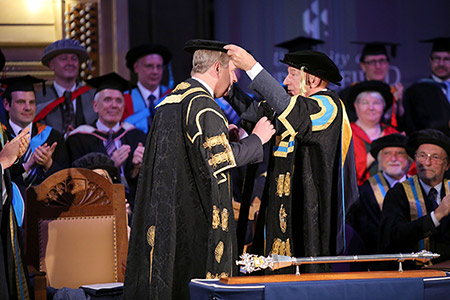 “We can take great pride in the fact that back in 2004, the offer of the Chancellorship of the University of Huddersfield was an earlier example of this exploratory urge,” said Professor Cryan.

“It is a mark of the man that at the height of his Hollywood success he should conceive the ambition not to star in even bigger movies and TV shows, but to return to the British theatre community which had trained him and in which he had made his reputation.

“The offer to become the Chancellor of the University of Huddersfield was, as Patrick Stewart has generously acknowledged, a catalyst for his relocation to the UK,” continued Professor Cryan.

“The University of Huddersfield acquired a man who was arguably the country’s most instantly recognisable and widely-admired chancellor and one who – as he had insisted would be the case – was greatly committed to the role, devoting a large amount of time to such events as awards ceremonies, meeting staff and students and giving practical advice during sessions he conducted in his capacity as Professor of Performing Arts.”

After Mirfield-born Sir Patrick had been made Chancellor Emeritus, he gave an address in which he spoke of his own background and education and how – after 17 years living and working in the USA – he found the offer of the Chancellorship “irresistible” and that it helped to-root him in his past.

He said that he had found the University of Huddersfield and its people “innovative, creative… and full of humour”.