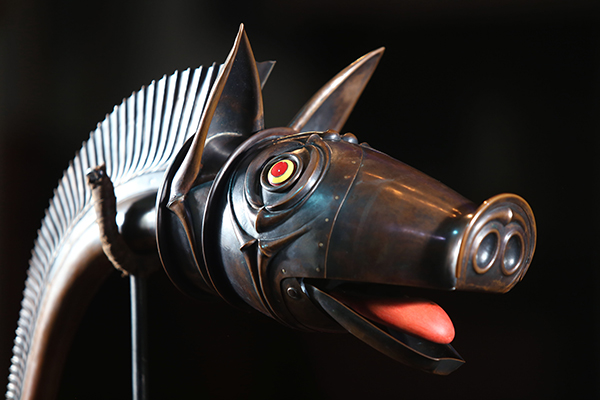 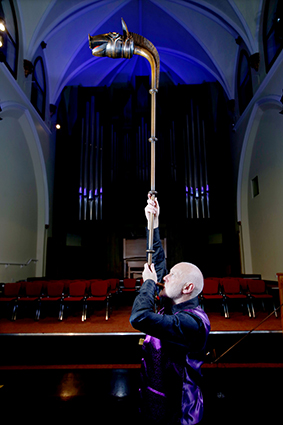 THE University of Huddersfield wins major awards for researching and originating the most advanced contemporary music.  But it is also playing a key role in rediscovering sounds of the distant past and presenting them to modern audiences.

A series of recordings featuring recreations of ancient instruments – some dating from the Bronze Age, more than 2,000 years ago – is being made at the University.  They will issued by a prominent international label. 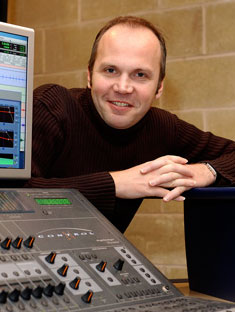 And the University is a hub for the European Music Archaeology Project (EMAP), which is researching the sounds of prehistory.  Dr Rupert Till (pictured left), a Reader in Music with specialisms that include sound archaeology, is a member of the EMAP team and co-producer of the recordings.

He is also involved in the EMAP project to create a travelling exhibition that will use advanced audio and video technology to immerse audiences in the sounds and sights of ancient instruments and recreate the acoustics of prehistoric locations that include Stonehenge – an important strand of Dr Till’s research.

Music of the Carnyx

The University of Huddersfield is the venue for a series of master classes and concerts that form part of the EMAP project.  The first was by John Kenny (pictured right), a trombonist and composer who is also the leading exponent of the very earliest brass instruments, several of which have been recreated from specimens discovered by archaeologists.

Mr Kenny’s concert, at the University’s St Paul’s Hall, was entitled Dragon’s Voices – the Ancient Celtic Music of the Carnyx.  It featured his compositions and improvisations on two reconstructions of the carnyx, a large trumpet-like instrument topped by an elaborately fashioned wild boar’s head that was played across Northern Europe 2,000 years ago.  Roman armies and emperors encountered it during their conquests of Britain and Gaul and the instrument made such an impression on the Legions that it was depicted in coins and sculpture. 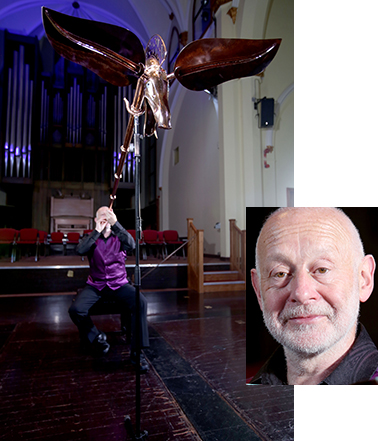 Original examples have been unearthed at Deskford in Scotland and – more recently – Tintignac in France, enabling reconstructions to be made.  As a noted trombonist, Mr Kenny was invited to play the newly-recreated carnyx and develop a repertoire for it.

At the Huddersfield concert, Mr Kenny (pictured left)performed on the two reproductions and concluded with his composition The Voice of the Carnyx, written for five of the instruments.  He performed one part live with a multi-tracked recording of the other four.

Other early instruments also featured in the concert, ranging from a conch shell – a natural amplifier blown like a trumpet – to a recreation of an Iron Age horn found in Ireland.  There was also a British premiere when Mr Kenny made his UK debut on a recently-fashioned Etruscan trumpet, created from a detailed and life-sized tomb relief in Italy.

Among his performances – which utilised a wide range of techniques that included singing into the instruments – John Kenny provided detailed historical background to the instruments and their places in ancient culture and ritual.  He also described his own journey into the world of musical archaeology, which began in 1993 when he was first asked to play a rebuilt carnyx. 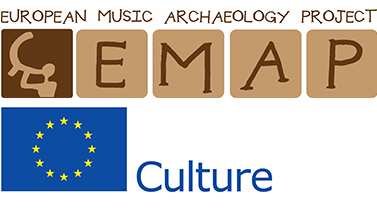 During his visit to the University of Huddersfield, Mr Kenny went into the studio to make a new recording of carnyx music.  Produced by Dr Till, this will become one of a sequence of releases on Delphian Records, which was Gramophone magazine’s Label of the Year in 2014.  Other recordings to be made at the University and issued as part of the EMAP project will feature the earliest known Scottish bagpipe music and the sounds of ancient Scandinavia and of prehistoric bone flutes.

The EMAP exhibition begins its European journey in Sweden in June 2016 and comes to the UK – at the National Museum of Wales – at the start of 2018.

Summing up the wider purpose of the EU-backed project, Dr Till said: “To understand the music of ancient Europe is to understand our common European heritage, because this ancient music crossed borders.

“Understanding our past helps us understand ourselves.  The European project is under so much pressure at the moment, it is important to try and understand issues of migration and the music and culture of the past.”

The European Music Archaeology Project is grateful for the support of the Culture Programme of the European Union.