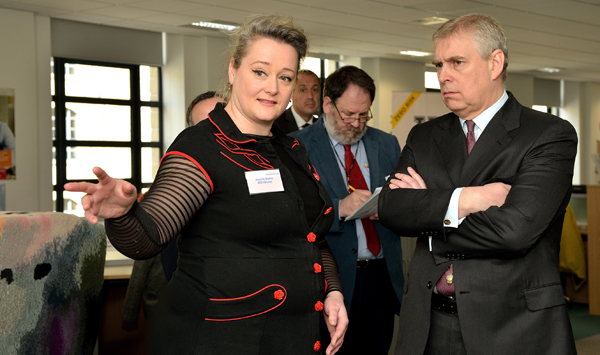 HRH The Duke of York took a keen interest in Jo Harris's business idea for IDEAShaus when he visited the campus in March.

DESIGN courses at the University of Huddersfield are a source of countless cutting-edge ideas from ambitious students, but how can they find their way from portfolio to production line?  A lecturer has launched an enterprise that will act as a conduit between students and industry.

It will also lead to an important new qualification for Joanne Harris, as the new business is at the heart of her research for a Doctor of Enterprise (EntD) degree, now being offered by the University as part of its mission to boost entrepreneurialism.

Joanne is a senior lecturer in surface design – with industrial design experience herself – and she has launched a business she names IDEAShaus.  For several years, design students whose work is a direct result of industry collaboration have been selected to exhibit at the highly prestigious International Surface Design Show, held annually in London.

Their design ideas – principally for walls and flooring products – have created exceptional interest and links with industry were being formed.  But Joanne decided there was a need to take things further.

“We were making important contacts with industry, resulting in placements, sponsored projects and employment, but the students’ ideas were not converting directly into any revenue,” she said. 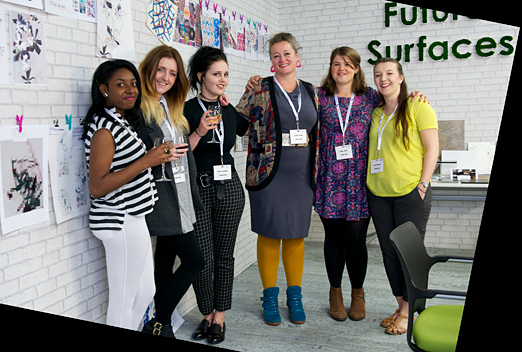 “Every year we have an exciting stand on display, as the only university exhibitor at the Surface Design Show, though I realised many companies don’t have the time to explore ideas and concepts even though they were very interested, so the real business opportunities generated through the exhibition are not being converted effectively into commercial enterprise opportunities.

“So, IDEAShaus is a commercial enterprise working with current students and alumni to convert designs for the surface industry that companies can buy or commission.”

The name of the new enterprise is a reference to the Bauhaus, an influential school of art and design from inter-war Germany.  Joanne has been studying the movement and been inspired by its fundamental belief in taking ideas from art and design practice through to industry.

She developed the concept for IDEAShaus – for which she is Creative Director – and it has a base in The Duke of York Young Entrepreneur Centre at the University of Huddersfield.  When The Duke himself paid his latest visit to the Centre, he met Joanne and was intrigued by the Doctorate of Enterprise now being offered by the University.

The EntD degree requires candidates to establish an enterprise and use it as the basis for research and a thesis.  Joanne will use real case studies to show the journey of ideas from curation to industry.

“As IDEAShaus takes shape, the enterprise could have a number of roles,” said Joanne, “such as acting as an agency for design students as they formed links with industry.  It could also help design students boost their employability skills and play a part in developing Knowledge Transfer Partnerships that are formed between universities and industry and receive government-backed funding.

Joanne Harris is now the Course Leader for the MA in Fashion Textile Practices at the University of Huddersfield and exhibitors at the next Surface Design Show – in February 2016 – will include some of the most talented graduates from surface design and postgraduate students from the cohort beginning the course in September 2015.