“Let There Be Peace” – Poet Lemn recites his poem on campus 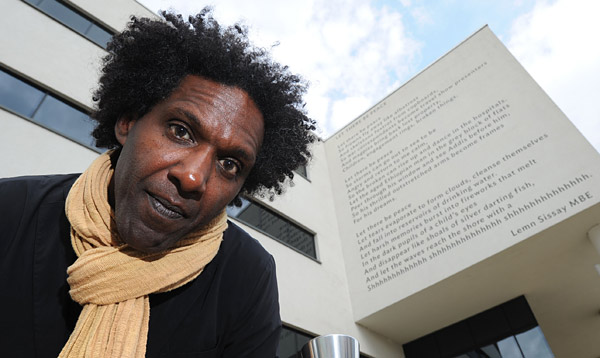 A LEADING poet’s plea for peace is now a dramatic feature of the University of Huddersfield, where it is prominently displayed at the heart of the campus, to be seen and read by hundreds of students, staff and visitors every day.

Written by Lemn Sissay MBE – a playwright and broadcaster as well as a poet whose works have been studied at A-level – it is entitled Let There Be Peace.  It has been inscribed in large lettering on an exterior wall of the University’s Creative Arts Building.

Mr Sissay has some important links with the University of Huddersfield and he made a return visit for the ceremonial inauguration of his poem.  He captivated a large outdoors audience with a dramatic rendition of his work.

He was introduced by the University’s Vice-Chancellor, Professor Bob Cryan, who described Lemn Sissay as “one of the most inspirational people you could hope to meet”.

He told the audience how the University of Huddersfield had become one of a small but growing network of public locations around the world where Let There Be Peace was displayed.  Professor Cryan urged all passers-by to read it and take the poem’s message to heart.

“It is a deeply personal poem, with elements of Lemn’s trademark humour, but it has a universal and timeless message – a message that is as pertinent as ever, perhaps more so, in a world that is currently the scene of so much conflict,” he added, speaking at a ceremony that was also attended by the Mayor of Kirklees, Councillor Ken Smith, and Huddersfield MP Barry Sheerman.

Lemn Sissay spent his childhood in the care system in Lancashire and this background was a catalyst for his links with the University of Huddersfield, where he has lent his name and support to a scholarship scheme that enables gifted young people who were brought up in care to undertake PhD research.

He has also delivered several inspirational talks at the University, which awarded him an honorary doctorate in 2009.

When he returned to the University for the inauguration of Let There Be Peace, Lemn Sissay’s schedule included a 60-minute session with the University’s creative writing students.  He told them about his career, his range of activities, the influence of his upbringing, his belief in the importance of poetry and storytelling and how it was vital for writers to discipline themselves so that they put pen to paper every day.

He gave practical advice on how writers – including poets – could earn their living by exploring a wide range of outlets.

“There is money to be made from poetry,” he said, “but if you do poetry solely for money, there is no validity in it.” 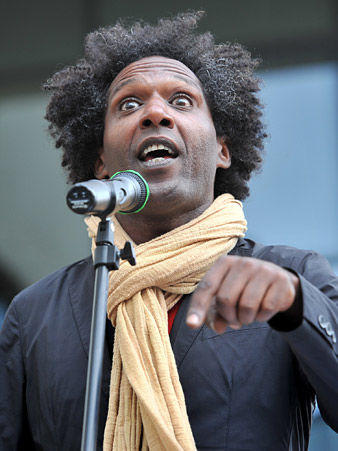 Let there be peace

And skeletons foxtrot from cupboards,

And magpies bring back lost property,

So storms can go out to sea to be

Angry and return to me calm,

So the broken can rise up and dance in the hospitals.

Let the aged Ethiopian man in the grey block of flats

Peer through his window and see Addis before him,

Let there be peace

And fall into reservoirs of drinking water.

In the dark pupils of a child’s eyes

And let the waves reach the shore with a