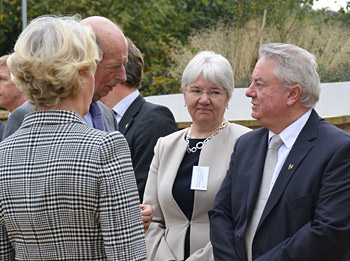 FOR His Royal Highness The Duke of Kent, his latest visit to the University of Huddersfield had a global dimension.  He met students from many different countries and continents and was deeply impressed by the University’s success in overseas recruitment.

It has earned the University a Queen’s Award for International Trade, and His Royal Highness came to make the formal presentation to Professor David Taylor, Pro Vice-Chancellor (International) and to Professor Chris Cowton, Dean of the Business School, which has been particularly successful in recruiting students from overseas. 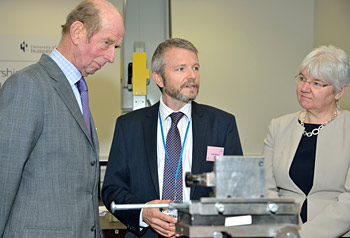 The Duke of Kent also presented Professor Liz Towns-Andrews (pictured right with HRH The Duke of Kent touring the NPL Lab with Laboratory Manager Andy Morris - centre), the University’s Director of Research and Enterprise, with a Queen’s Award for Enterprise Promotion.

The ceremony took place at the University’s new £12 million 3M Buckley Innovation Centre, which was the brainchild of Professor Towns-Andrews.  The Innovation Centre was part-funded by the European Regional Development Fund and Kirklees Metropolitan Council.  His Royal Highness was introduced by the Vice-Chancellor, Professor Bob Cryan, who said the University of Huddersfield was going from strength to strength.

He described successes in the fields of education, enterprise and international recruitment and highlighted with the numbers of overseas students increasing fourfold. 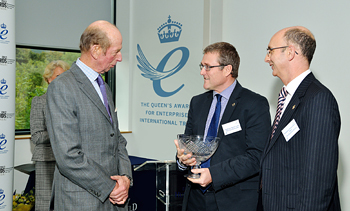 “It was an enormous honour for the University of Huddersfield when we learned that we were to be the recipient of a Queen’s Award for Enterprise Promotion and for International Trade.

“The individuals and the departments who have earned these awards have brought great distinction to the University.  And the fact that His Royal Highness The Duke of Kent is here today to bestow the awards adds further to the achievement,” said the Vice-Chancellor.

His Royal Highness was introduced by the Lord-Lieutenant of West Yorkshire, Dr Ingrid Roscoe, and he congratulated the recipients of the Queen’s Awards.

“It is very unusual for a university to have earned this distinction,” he said.

Before the presentation ceremony, The Duke of Kent was invited to inspect the facilities in the 3M Buckley Innovation Centre and was introduced to five international students – from Egypt, Lithuania, Vietnam, Nigeria and India – studying for a variety of degrees or carrying out postgraduate research.

His Royal Highness chatted to the students about their subjects and their career goals and learned that the University had some 3,000 overseas students from 130 countries.  He later described this as an “absolutely terrific” achievement.

Pictured below are the University's international students who met HRH The Duke of Kent, left to right, Mai Dam, Samar Mansour, Vijay Bhutada, Solamita Sabaliauskaite and Michael Agolom and below the students are pictured in conversation with His Royal Highness. 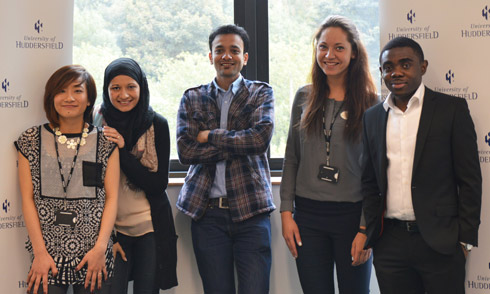 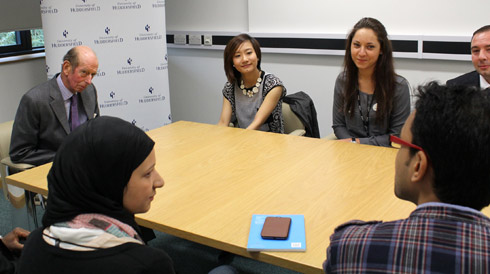 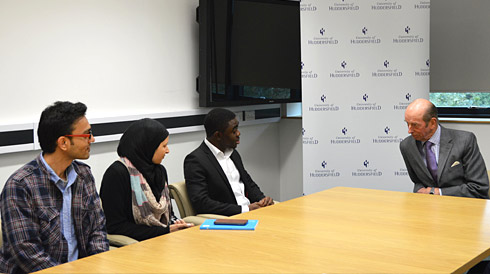