Voices from the African Caribbean Diaspora 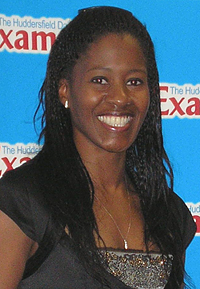 ‌FROM soul food to sound systems... the experiences, culture, history and identities of Britain’s African Caribbean communities were explored and celebrated at a pioneering conference held at the University of Huddersfield.

It drew an audience of 80 people, some from far afield, which meant that the first Voices from the African Caribbean Diaspora event was a big success, delighting its principal organiser, University of Huddersfield senior lecturer Dr Michelle Bartholomew, of the School of Human and Health Sciences.

The genesis of the event was in the research that Dr Bartholomew conducted for her PhD, when she interviewed older African-Caribbean women about their health experiences.

“The women I interviewed all came from the West Yorkshire area and I wanted to be able to share my research with these women collectively, but also within a forum with other members of the community.” 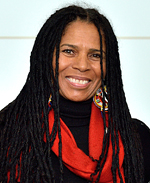 As plans for her conference took shape, supported by a team of organisers from the University and the local community, it was decided to hold it during Black History Month and the event featured two keynote speakers, the University of Huddersfield’s Professor Adele Jones (pictured right) and the Rev Dr Michael Mkpadi, who is Catholic Chaplain for the African and African Caribbean communities of the Leeds diocese.

Professor Jones’s talk was entitled Partnerships for Change and it drew on the work carried out in the Caribbean and Africa by the University’s Centre for Applied Childhood Studies.  “Meaningful and genuine partnerships” were formed to tackle social problems and the lessons learned from the project were applicable to children in the UK too, argued Professor Jones.

Dr Bartholomew’s paper was entitled I don’t want Fish ‘n’ Chips, I want Soul Food.  It drew on her research among African Caribbean women and stressed the importance of particular foods in maintaining a connection to homeland cultural beliefs.  A significant finding of the research was that many of the women distrusted western medicine and believed that herbal remedies from their homeland gave some protection against illness. 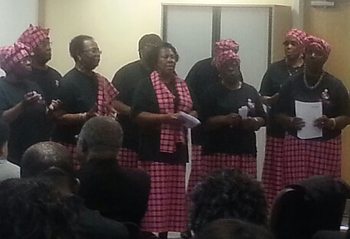 Pictured left: Choir singing at the conference held at the University of Huddersfield

‌The conference was attended by community groups, including Women in Action, a Huddersfield organisation whose choir sang at the event.  Also, funds were raised to support the Ugandan organisation Wells of Hope, which provides care and schooling for the children of prisoners.  The University of Huddersfield has formed strong links with the organisation.

Now, it is hoped to publish an edited collection of papers presented at the first Voices from the African Caribbean Diaspora conference, added Dr Bartholomew.