THE University of Huddersfield is home to a new centre that will carry out research and actively involve itself in projects to ensure sustainable development around the world.  It was launched with the assistance of one of the UK’s best-known entrepreneurs, founder of a business based on ethical and environmental principles.

The special guest at the launch day of the Centre for Sustainable and Resilient Communities (CSRC), based in the University’s Business School, was Richard Reed, co-founder of innocent, which produces a best-selling range of smoothies and fruit drinks.

In this video Richard Reed, Co-Founder of innocent smoothies, gives an exclusive interview to the University of Huddersfield on his most recent business ventures including JamJar Investments and 'Art Everywhere'.

Yorkshire-born Mr Reed – who has featured in the TV series Be Your Own Boss – was awarded an honorary doctorate by the University of Huddersfield and on his latest visit he told his audience at the CSRC launch about the origins of his company and its mission to “make the world a little bit healthier”.  The aim was to sell food products that were nutritionally beneficial, but also had low social-economic and environmental costs.

The company is actively involved in projects with growers in continents and countries such as Africa and India to ensure sustainability, and innocent has set environmental and social standards that are the toughest in the world, said Mr Reed.

Climate change is the biggest threat to the long term future of innocent, he added, and the company, which refuses to transport by air, has made many innovations in its packaging and distribution methods, some of which have begun to influence the practice of larger companies. 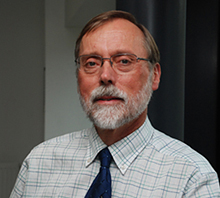 ‌The launch day of the CSRC was opened by its director, Professor Adrian Wood (pictured right).  He said that the Centre, while being a new development, is based on work that has been taking place at the University since the 1990s.

The Centre’s key focus is on community-level work and it will carry out “impact-focussed research”, said Professor Wood.  It will forge partnerships with various tiers of government, plus non-governmental organisations and community groups.  Research by the CSRC will also link in with teaching at the University, which is home to a Master’s course in Risk, Disaster and Environmental Management led by Dr Julia Meaton, also a member of the Centre.

Sustainability has economic, social and environmental dimensions, said Professor Wood, and resilience – the ability of a community to recover from shocks – was critical.

“But is resilience purely about returning to the way that things were beforehand?” he asked. 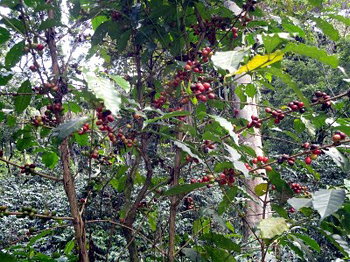 Professor Wood described his long-term involvement with forest communities in South West Ethiopia, the part of the country that he terms “Green Ethiopia”. This, he said, was inter-active action research in a forested region whose natural products included spices, honey and wild coffee (pictured left).

But the forest area has been depleted because of a lack of clear tenure for local communities.  Over the course of ten years, Professor Wood has taken part in a Participatory Forest Management project.  The creation of Forest Management Associations has established the rights of communities and enabled them to benefit financially from its products, including the Arabica coffee, which originated in the area.

The CSRC launch event also heard from Ian Rufus, of Public Health England, who described the work of this new governmental organisation with a mission to protect and improve the nation’s health and to address inequalities.

He too discussed the issue of resilience, after a community had suffered from a setback or disaster.

“Is this enough to spring back?  Wouldn’t we prefer a community to be in a better condition than before?” he queried.