“...our sustainability agenda goes a long way beyond the environmental interpretation...”

THE University’s Vice Chancellor, Professor Bob Cryan, has handed out the Sustainability Awards to members of staff and to nominees from the Students’ Union at a special ceremony held this week.

Seven awards were presented and included many areas of the University’s work; from a man who has encouraged students to grow fruit and veg to a professor who has worked for decades to improve the lives of Ethiopian forest communities.

“Our sustainability agenda goes a long way beyond the environmental interpretation of the term, although that is important to us too,” said Professor Cryan, who outlined the University’s green policies, including an Environmental Strategic Plan.

Professor Cryan also stressed the importance of financial sustainability.  The University of Huddersfield is debt free and has developed a policy of “building without borrowing”.

“Among English universities with a turnover of more than £100 million, Huddersfield is now the strongest financially, and this is despite a continual investment in the development and maintenance of our campus,” he said. 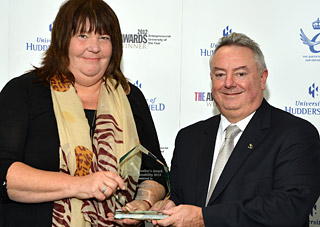 ‌Dr Julia Meaton (pictured left receiving her award), who is a Senior Lecturer in the Business School, running an MSc in Risk Disaster and Environmental Management.  She won an award for the use of practical sustainability-related projects within academic courses.  Recent research projects and articles from Dr Meaton have dealt with issues surrounding sustainable development in the Middle East and Africa.  She is a member of the editorial board of the journal Sustainable Development. 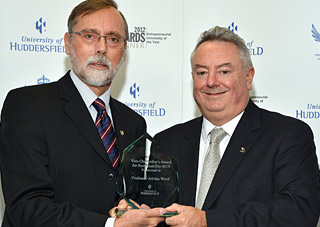 Professor Adrian Wood (pictured right receiving his award) has received a Sustainability Award in the category of social responsibility.  Since the mid-1990s he has been involved in collaborative projects in South West Ethiopia, helping communities to secure the rights to their forests and to gain a sustainable livelihood from the harvesting of natural produce such as honey and coffee.  It is work that has earned hundreds of thousands of pounds in funding from a wide variety of sources.  Professor Wood has been personally involved with Ethiopia for the best part of 40 years, since his PhD research.  He is head of the Centre for Sustainable and Resilient Communities that was recently launched at the University of Huddersfield. 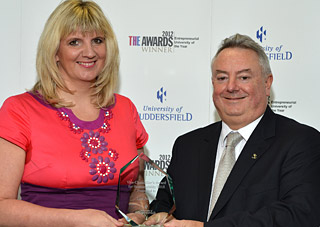 The Sustainability Award for promoting positive behaviour went to Lisa Jeffries (pictured left receiving her award), who is a Senior Clinical Technician in the University’s School of Human and Health Sciences.  She is in charge of the huge quantities of the consumables and equipment that are required by nursing and other healthcare students and wins her award for the ingenuity she displays in ensuring that as little as possible goes to waste.  For example, an art lecturer quickly saw the creative possibilities in some surplus plaster of paris bandages and a £60,000 simulated patient named iSTAN – superseded by new models – has been offered to the University’s computer scientists who can make good use of its sophisticated circuitry. 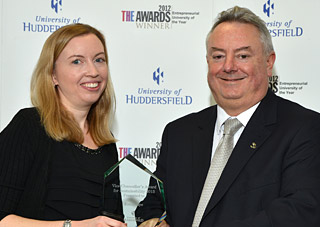 The University’s Sustainability Champion was named as Emily Rye (pictured right receiving her award), Environmental Co-ordinator in the University’s Estates and Facilities department, which has played a crucial role in ensuring that Huddersfield is one of the most environmentally sustainable in the UK.  New buildings have achieved a rating of “Excellent” under the world-leading Building Research Establishment Environmental Assessment Method and an ongoing programme of environmental measures includes heat recovery systems, installation of LED lighting and a massive, £5 million window replacement scheme that will help achieve the goal of cutting carbon emissions by 25 per cent within seven years.  Emily Rye is also the co-convenor of the Education for Sustainable Development Forum, which came into being last year. Meetings of the Forum are attended by representatives from across the University.

There were also three Sustainability Award winners nominated by the University of Huddersfield’s Students’ Union. 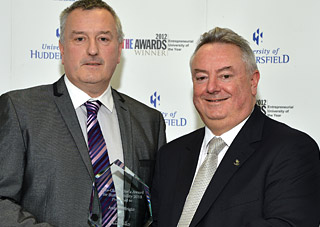 Andy Wright (pictured left receiving his award), the Students’ Union’s Buildings and Safety Manager, worked in the building industry for 20 years before arriving at the University four years ago.  His health and safety role was soon augmented by responsibility for environmental issues.  During his time, the University of Huddersfield has progressed from a Bronze to a Gold Star in the Green Impact Scheme run by the National Union of Students.  This has been achieved by measures such as strict purchasing policies and careful monitoring of utility usage.  Andy Wright has also helped to launched HarvestHud.  A group of 24 student volunteers have begun to cultivate an area of land in order to grow fruit and veg for the Welcome Centre at Lord Street Methodist Mission in Huddersfield.

Another of our Students’ Union sustainability award winners is named The One Campus Project, co-ordinated by Matt Christie, a former President of our Students’ Union who now works in our International Office.  He is joined in this project by Sarah Harris, Coco Toma and Nosheen Dad, who is the current president of our SU.  The goal of One Campus is to support new international students, helping them to integrate into life here and to promote cross-cultural knowledge and understanding.  It was piloted at the start of this year, when 15 new international students and 15 UK and EU students were brought together in a social environment.  Now the One Campus project has been fully launched, and very successfully, with 72 students on board, representing 30 different nationalities.  They have been formed into 12 groups, each with a balance between new arrivals at the University and more seasoned students.  The careful blend of UK and EU students, with visitors from farther afield is also preserved, so the One Campus project is an enjoyable way to integrate into life at the University of Huddersfield. 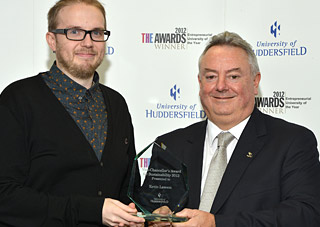 The final student sustainability award winner is Kevin Lawson (pictured right receiving his award), who is in his second year as the editor our student magazine named T’Hud.  Kevin, who was Huddersfield Student Media Personality of the Year in 2012, is a third-year student of music journalism and he has taken the magazine in all sorts of directions whilst providing student journalists with plenty of opportunities, not least to look outwards into the community beyond the campus.  Kevin also produces a podcast named Edit Radio, which can be accessed via iTunes.  One of his goals is to try and revive and sustain standards of music writing by launching a website, as a social enterprise, that would provide a new outlet for new and experienced writers.