Huddersfield announced as 'University of the Year'

HUDDERSFIELD has been declared University of the Year by one of the UK's leading publications. 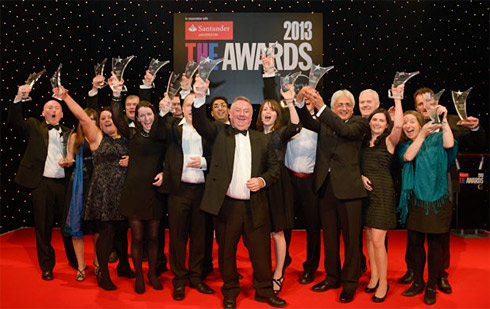 Professor Bob Cryan (front centre) and the other award-winners at the presentation of the Times Higher Education magazine's 'University of the Year' Award to the University of Huddersfield.

The announcement was made during a ceremony at London’s Grosvenor House Hotel, venue for the 2013 Times Higher Education Awards.

"This is the most fantastic honour!" said a delighted Professor Bob Cryan, the University of Huddersfield’s Vice-Chancellor, who accepted the award in person.

"It is a tribute to all the staff who have worked so hard to get us where we are today.  We are now well established as one of the country’s most innovative universities – and the best is yet to come!" added Professor Cryan.

Under his leadership, the University has become an extremely dynamic institution and its bid to become University of the Year was based on an exceptional performance during the 2011/12 academic year.

Achievements included winning the Times Higher Education award for Entrepreneurial University of the Year; receiving two Queen’s Awards for Enterprise; a top 10 position in the International Student Barometer; the unique attainment of having 100 percent academic staff becoming Fellows of the Higher Education Academy; topping the table for National Teaching Fellows awarded in the last 5 years; plus a nationwide top 10 rating for graduate employment and for financial security. 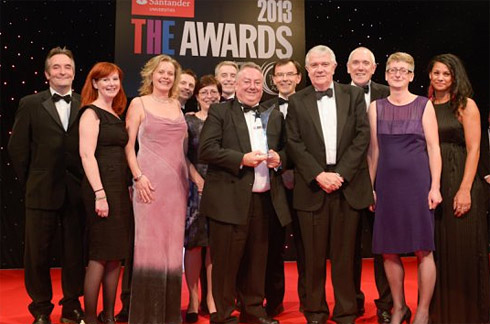 Professor Bob Cryan with other Huddersfield staff members at the presentation of the Times Higher Education magazine's 'University of the Year' Award.

The successes earned Huddersfield its place on the six-strong shortlist for the University of the Year title.  Then senior figures from the Times Higher Education magazine paid  fact-finding visits to the campuses.

After the award was announced, Mr Gill said: “Huddersfield shone through in the toughest of categories on the strength of an exceptional year.

“The university’s achievements were backed up by impressive figures for both student satisfaction and employability, and a clear sense that Huddersfield is a university that is at the heart of its home town, as well as making a very real contribution to the wider region, the higher education sector, and country as a whole”.

The Times Higher Education Awards have been running for nine years and are regarded as the sector’s equivalent to the Oscars.  The competition’s rules stated that the title University of the Year is awarded to an institution that has "demonstrated exceptional performance".

Although research, teaching, access and business performance would be taken into account, the main criterion would be evidence of particular bold, imaginative and innovative initiatives that had advanced the institution’s reputation during the 2011-12 academic year.

It was almost a double celebration for Huddersfield on THE Awards night.  The University also made it to the final shortlist in the category for Outstanding Contribution to the Local Community.

This was in recognition of the University’s  Graduate Opportunities Programme, which provides careers advice and guidance to all unemployed graduates – whatever their former university – residing in the areas of Calderdale and Kirklees currently claiming Job Seekers Allowance.

The University of Huddersfield has been consistently successful in ensuring that an exceptionally high proportion of its own former students are in paid employment, most of it graduate level, within six months or less.  This is achieved in part by ensuring that all degree courses have a work-placement element.

The Grosvenor House awards ceremony was hosted by TV and radio comedian and presenter Sandi Toksvig.