Art based on the ‘Rights of Plants’ receives national acclaim 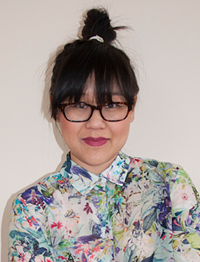 SOME people believe that the Linaria is a highly sociable shrub that just loves to have its leaves tickled.  And now it has become the first plant with its own Twitter account... thanks to a University of Huddersfield lecturer who combines design and technology to produce thought-provoking pieces that stimulate debates surrounding our perceptions and understanding of plants.

Featured at the recent London Design Festival was a project conceived and created by Jenny Lee (pictured left), of the University’s School of Art and Design, in tandem with her collaborator, researcher Amy Congdon.

The project was inspired by a 2008 document known as the Swiss Declaration of Plant Rights, which asserted that the dignity of plants as living beings and how their rights should be considered of equal standing to animals.

“I have some empathy with the Declaration,” said Jenny Lee, “but without scientific proof to support their claims, it is difficult to be in total agreement.” 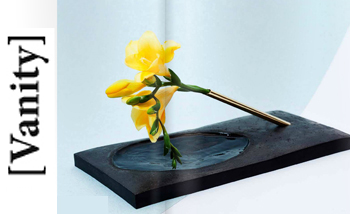 ‌‌Nevertheless, Jenny and Amy – who had already been drawing inspiration from botany in their research – were intrigued by the idea and they discovered that some plants were traditionally associated with certain personality traits.  It was the stimulus for an exhibition, which consisted of specially-crafted plant vessels alongside a 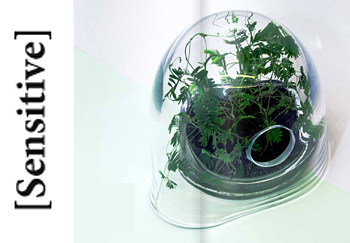 ‌‌‌selection of tools to represent the plants needs and celebrate its personality.

For example, the Narcissus plant otherwise known as the Daffodil, which is legendarily associated with the greek mythology ‘Narcissus’, was provided with a vessel that included a pool of water so that it could examine its own reflection (as seen in the top right hand image).

“We also designed specific tools for this plant, affectionately known as the ‘preening kit’, which allows the plant to vainly maintain its image” said Jenny.

The Mimosa is regarded as the sensitive, shy plant, so it was fully enclosed in a glass vessel, meaning it could not be touched by human hand (pictured above).  Some research does indicate that certain plants don’t respond well to human contact.

‌‌The highly-sociable Linaria, however, has no such inhibitions.  It allegedly shows pleasure at being stroked or tickled, and the two designers furnished it with a vessel made from silicon that wobbled when activated by a concealed motor (as seen below). 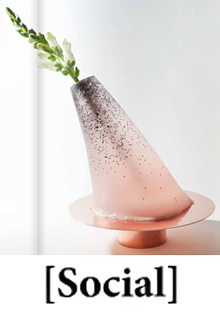 ‌But what if the owner of a Linaria was absent at work all day?  The solution devised by Jenny and Amy was to design a special fan that would mechanically stimulate the lonely Linaria – idea inspired by the scientific term, Thigmomorphogenesis – and it could be activated remotely by dialling up a Twitter account that was specially set up.

After its success at the London Design Festival, Jenny and Amy plan to exhibit it at galleries in the UK and overseas.

“The project has both a poetic and a humorous approach,” said Jenny.  “We are not saying that plants actually do have feelings, but we are getting people to re-evaluate how they see plants and to consider the role they play in our lives.  We found a lot of stories about how people have made meaningful connections with plants.”

Meanwhile, at the University of Huddersfield, Jenny is currently working on a project in collaboration with Melissa Fletcher and Stephen Calcutt, named Material Alchemy – a series of workshops that will enable students to engage with technology and the smart materials of the future, for example, the integration of technology into textiles to create interactive, responsive surfaces.